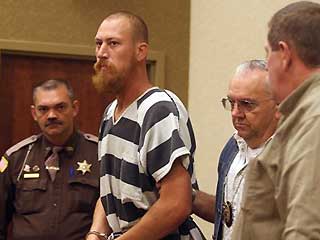 (An update. This is my new column for this week's Newton County News.)

The word that Stella residents have waited for since November 2007 was delivered by a jury tonight (Tuesday).

It did not take long for the jury to convict Chris Collings, 37, , of first degree murder. His attorneys did not put on any witnesses. That included Collings, but the jury had an opportunity to listen to the defendant anyway.

The words that appear likely to bring the death sentence for Collings came from his own mouth, delivered in a deathly quiet courtroom. The jurors listened as Collings told deputies how he came to rape and murder a nine-year-old girl, a girl for whom he had been a babysitter.

The same story that has lost none of its shock value over the past four years and four months was heard by these jurors for the first time. They heard from Collings’ lips how he, high from a combination of alcohol and marijuana, crept into the fourth grader’s bedroom, lifted her from the bed and took her to his home, where he violated her. As he was taking her back to Stella, he said, she managed to get a glimpse of him, so to save his own sorry life he took hers, strangling her.

Collings insisted throughout his interviews with law enforcement officers that he, and he alone, raped and murdered Rowan Ford and that her stepfather, David Wesley Spears, had nothing to do with it.

“The only thing he’s guilty of is leaving that house and leaving that little girl alone,” Collings told deputies.

Spears’ appearance at the trial was anticlimactic. He was called to testify for the prosecution but exercised his Fifth Amendment rights, refusing to say anything that would incriminate himself.

Collings’ conviction is only one part of the justice those who knew Rowan Ford and those who came to know her through the photos and stories that have been published since her murder.

The next step, the trial of her stepfather, is scheduled for late this year. When David Wesley Spears is brought before a jury more than five years will have passed since Rowan’s murder.

The trial will come at a time that should have been an exciting and memorable one for young Rowan- her freshman year at .

Thanks to one of the most depraved, senseless acts this area has ever seen, that life was violently taken from Rowan Ford.

Justice has not come swiftly in this case, but thankfully it has come.

the jury was from platte county not clay .