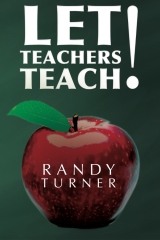 The essay that allegedly got me fired and some that may have contributed to that firing are included in Let Teachers Teach, available for the first time in paperback as of today. The book features cover and design work from David Hoover and Cody Dyer at Drop Cap Publishing.

At the moment, Let Teachers Teach is available only on its CreateSpace website. It features a new introduction and 46 of my essays on education with updates and notes included on several of them.


The book includes the following essays:1. Violence, Statistics, and American Education- This one, written just after Sandy Hook, is the one that is being used against me by the joplin School District because I posted a link to my book No Child Left Alive from it when I copied and pasted it onto Room 210 Discussion.

3. The House of Bricks- One of my Joplin Tornado essays, includes the hunt for one of my eighth graders in the apartment complex behind the 15th St. Wal-Mart.

4. Missouri's Newest Lobbyist, Michelle Rhee- My examination of the StudentsFirst organization and how its name does not go along with its views.

5. A Seventh Grader's Gift That Keeps On Giving- The effect of a New York teenager's gift to my class after the tornado

6. A Day of Miracles- A return to school after the tornado

8. Returning to My Tornado-Ravaged School- My first visit to East Middle School, two days after the tornado

9. Sanitizing of Huckleberry Finn- My thoughts on a new version of Mark Twain's classic that removes the N word, plus remembering my sixth and seventh grade teacher Mrs. Jean Rowe, who read the book to me and my classmates.

10. Speaking for Victims of a School Shooting- Looking back at the shooting at Memorial Middle School. So many people were sympathizing with the shooter. I wrote this one for the other students.

11. The Dangers of Data-Driven Education- No wonder the people in administration have a problem with me.

12. The Lies They Tell About Teachers- The next few essays are all written as a response to the ongoing attacks on classroom teachers.

13. The Changing Expectations of Teachers- I tell the story of a student who came by after school just to talk and I found out years later that innocuous conversation had driven thoughts of suicide out of her mind. Now, with a culture of highly scripted, micromanaged meetings disguised as "collaboration" and "professional development," I wonder if a teacher will even be available for the next young person contemplating killing himself or herself.

16. Tribute to an Inspirational Teacher- Each year, until this one, I have asked my students to write essays describing an East Middle School teacher who has inspired them. The students vote on the Most Inspirational Teacher, not based on which teacher is the most popular, but on which student wrote the best paper. In this essay, I write about when this award was received by one of my favorite East colleagues, Kim Frencken, because of a paper written by one of my favorite former students, Taryn Parker.

17. To Sir With Love Revisited- Usually every year, again not this one, I show the Sidney Poitier movie To Sir With Love. In this essay, I talk about the difficulties his character, teacher Mark Thackeray, would have with today's soulless data-driven education.

18. Remembering Ryan Baker- One of the most difficult essays I have ever written. This is a tribute to one of my Diamond students after he committed suicide.

19. There Is No Crisis In Public Education- I make the case for public education

21. A Warning to Young People: Don't Become a Teacher- Ironically, I wrote this one the day before I was removed from East by a police officer in front of my students and it was published on Huffington Post the next day.

22. Mr. President, My Students Deserve Better- After the State of the Union Address, I expressed my disagreement with the president over this goals for education.

23. When Technology Isn't the Answer- What happens when the lights go out? This essay was based on an experience that occurred this year while my students were working on their third quarter research project.

24. StudentsFirst Report Cards to Fail to Mention, Crime, Poverty- According to this organization, the only thing that has an affect on education is teachers. Strangely, their report card also grades states down if they actually have pensions for teachers.

25. No Guns for This Teacher- Written after Sandy Hook when arming teachers was the fad.

26. An Argument for Teacher Tenure- I would think my own case would be a convincing argument for teacher tenure.

27. It's Not Bad Teachers; It's the Economy, Stupid- My thoughts on how the state of the economy affects education.

28. Teachers Do Not Have to be Political Eunuchs- Teachers can reveal how they think about issues without forcing students to follow those beliefs.

29. Message to a First-Year Teacher- I wrote this after seeing on Facebook how my former Diamond student Stephanie Taylor was preparing for her first year at Carl Junction. It offers advice for any young teacher.

30. Pray for Those Godless Public School Teachers- An argument against those who claim we are pushing secular humanism.

31. It's Time to Use Test Scores to Determine Teacher Pay- If you can't tell, I was being sarcastic.

32. My New Pacemaker- A personal essay, about my missing class and MAP tests to have my pacemaker implanted last year.

33. The Crisis in American Education is a Myth

34. A New Hope High School for Joplin- This one was written after the bond issue passed.

35. Saying Goodbye to the Forgotten School- My final trip to the old South MIddle School before it was torn down after the tornado.

38. All Public Schools Left Behind

39. Finding Hi in My Joplin Classroom- One of my favorite stories from the Turner Report and 5:41, about a student's gift to me.

40. Tornado Ends School Year for Most Inspirational Teacher- An essay about former EMS reading teacher Andrea Thomas, who should still be teaching there.

41. Gutless Media Has Failed American Schools- The media's poor coverage of education has allowed this ridiculous "reform" momvent to flourish.

42. Kick Me, I'm a Public Schoolteacher

43. Teaching to the Test

44. The Failure of American Teachers (my first Huffington Post blog)

Let Teachers Teach will be available on Amazon.com later in the week.