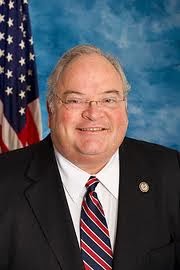 “I am pleased to see the House pass the Taxpayer Transparency Act in an effort to hold federal agencies accountable for their spending. My bill simply extends similar requirements already imposed on the House and Senate to the Executive Branch. I am hopeful the Senate will follow the House’s lead and pass this legislation in the name of good government and transparency,” Long said.

The Taxpayer Transparency Act requires Executive Branch agencies to disclose that advertisements are paid for at taxpayer expense.

By law, the U.S. House of Representatives is already required to include a disclosure statement on similar types of communication such as newsletters and franked mail, while the U.S. Senate is required to do the same by self-imposed rules.

U.S. Sen. Roy Blunt introduced companion legislation in the U.S. Senate.
Posted by Randy at 6:47 AM