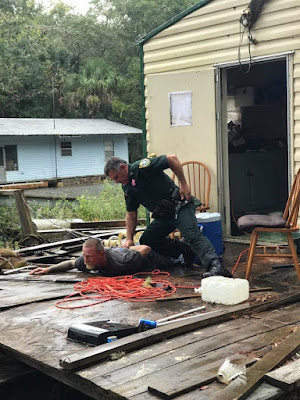 For the most part, my articles for the national Blasting News website have dealt with crime and courts and have painted a grim picture of the depths to which humanity can sink.

It is more of the same with the two articles I posted Wednesday night.

In the columns, I have written about education, I have noted many times that it is folly to hold teachers completely responsible for children's grades when we have no idea what kind of things are happening to those children at home.

Such is the case with the Florida girl whose parents forced her into prostitution at age three and up until she was able to get away from them at age 16.

They traded use of her body for drugs and money. One of my Blasting News articles details the events that led to the arrest of the parents.

The other Blasting News article is a follow-up to one I wrote over the weekend. At that point, the father of a two-week-old baby whose lifeless body was found stuffed into a duffel bag under a log in woods near her trailer park home, had been arrested for a probation violation. Now he has been charged with felony murder after the results of the autopsy came in. This post includes the information that the autopsy revealed, information about the 911 call the mother made when she discovered her baby was missing, and what the father was shouting in a convenience store that led the clerk to call 911 and enabled the sheriff to capture the father.