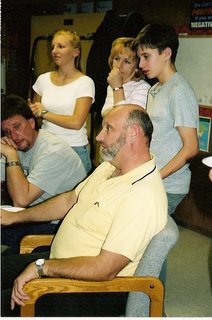 KODE continued its domination of the McDonald County church sex cult today, breaking the news that county deputies went to the compound at Cecil Epling Way to remove any leftover children and found no trace of the four church leaders, Rev. Raymond Lambert, 51, his wife, Patricia Lambert, 49, and her brothers (and his stepbrothers) Paul Epling, 53, and Tom Epling, 51.
The latest installment in Tara Brown's continuing investigation of this church and its sister church near Granby in Newton County, included the revelation that McDonald County Judge John LePage not only placed no limitations on the church leaders' travel while they are out on bond on numerous counts of having ritual sex with children, but he did not place any conditions that would require them to stay away from children while they await trial.
The latest chapter also included another interview with a former member of Lambert's Grand Valley Independent Baptist Church, who spoke of Lambert not being shy about sexual activities with church youth.
Rounding out the story was the information that George Otis Johnston, 63, pastor of the Grandview Valley Baptist Church North, turned himself in to McDonald County authorities on a charge of child molestation. Johnston, who is Lambert's uncle, also faces eight felony counts of statutory sodomy in Newton County.
(Pictured: Raymond Lambert is seated. His wife, Patty, stands behind him. Photo provided by Tara Brown, KODE)
Posted by Randy at 8:15 PM

Evidently, Judge LePage is a supporter of Raymond Lambert. Does anyone else find it strange that he did not put any stipulations on the four child molestors? Oh, that's right...their attorney is his fishing buddy, good ole Bob Evenson...oh and it sounds like the judge and Evenson like to talk behind closed doors in the courthouse over their dealings with the Lamberts and Eplings. This HAS GOT TO STOP. This is not justice, but the good ole boy network at its finest....Judge Lepage needs to be questioned over his relationship with Evenson AND the child molestors, the Lamberts and the Eplings...if he hangs around them too much, he will be converted into Raymond's doctrine, just like his best friend Evenson has. Watch out LePage!

Looks like LePage may have already been swayed over to the Lambert/Epling way of thinking. To all of McDonald County I say get rid of this judge. Yesterday.