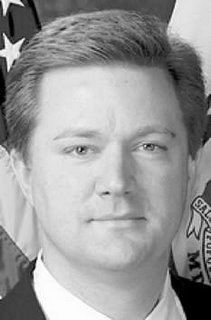 In an op-ed piece in today's Springfield News-Leader, Rep. Bob Dixon, R-Springfield, responds to a recent editorial which criticized Governor Matt Blunt's "my way or the highway" approach to politics.

Dixon notes increased funding for education, creation of new jobs (though he doesn't get into the quality and lower pay of many of those new jobs), bringing the Medicaid structure under control, and the state's having a budget surplus as examples of positive changes brought about Blunt and Republican legislators.
He concludes the essay by saying:

On more than one occasion, I have been impressed by his commitment to stand by tough decisions in the face of unrestrained criticism. You recently wrote about this governor, it's a "my way or the highway approach." That's not been my experience, but it does give me an opportunity to point out that even Missouri highways are smoother and safer since Gov. Blunt and the Republican majority took office.

The emperor has no clothes....or maybe Dixon has no dress.

Do we really expect the Majority leader to go against his governor, especially after what happened to Mark Wright?

I read the piece this morning didn' think it had any substance at all.

Get rid of Roy and his little boy!

You can tell its election season when you look at the editorial page; lots of letters from republican hot shots from the national, state, and local level.