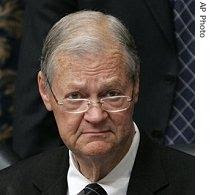 Fourth District Congressman Ike Skelton, D-Lexington, has been named a recipient of the American Patriot Award, presented by the National Defense University Foundation Inc. according to a news release issued today. The other recipient is Sen. John Warner, R-Virginia:

"We are very pleased that the 2007 American Patriot Award will be presented to two of the nation's finest patriots," Charles Link, president and CEO of the National Defense University Foundation and retired major general of the U.S. Air Force, said in a statement.

Skelton was first elected to the U.S. House of Representatives in 1976, the first of 16 terms. He is currently the chairman of the House Armed Services Committee, of which he has been a member for the past 25 years.