Jetton receives $6,375 from Plaster interests less than a month after controversial measure goes into effect 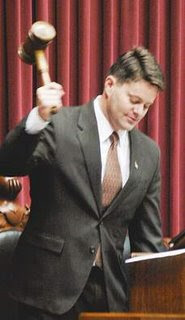 Speaker of the House Rod Jetton, R-Marble Hill, received $6,375 from Lebanon developer Robert Plaster or interests connected to him on Sept. 24, according to his third quarter disclosure report filed Oct. 11 with the Missouri Ethics Commission.

The Springfield News-Leader has had a series of article and editorials exploring how Jetton inserted a provision in a law that went into effect Aug. 28 that will allow Plaster to have an easier time taking property he owns and incorporating it as a village, which will exempt it from such governmental controls as planning and zoning ordinances.

In the Sunday News-Leader, reporter Kathleen O'Dell explored the connection between Jetton and Plaster, both politically and socially:

Public records show multiple Plaster donations -- $19,000 over three years -- to a political campaign committee over which Jetton holds influence, according to a News-Leader data study.

Jetton has also written in his Capitol Report journal about his two invitation-only hunting trips on Plaster's "Empire Ranch" in Laclede County.

At Plaster's largesse on the two trips, Jetton enjoyed, in his own words, "very thick and juicy steaks" and a "huge breakfast."

The residents say such ties indicate the powerful lawmaker got involved in a last-minute law change to benefit Plaster.

Uh, hey randy, do you want to finish the sentence? "The disclosure report also shows that St. Louis developer Paul McKee, who was a major beneficiary of the economic package that zipped through both houses." The report shows what about Paul McKee? Did you have another brain fart while trying to write this? What a goofy blogger you are.

I had to re-post this because the first line is being covered by the headline so here it goes again: Uh, hey randy, do you want to finish the sentence? "The disclosure report also shows that St. Louis developer Paul McKee, who was a major beneficiary of the economic package that zipped through both houses." The report shows what about Paul McKee? Did you have another brain fart while trying to write this? What a goofy blogger you are.

I would like to say I did that to add an air of mystery to the post, but somehow the last part did not show up (or I neglected to put it in). However it happened, I have corrected the mistake. Thanks for letting me know.

To help you out, I might note that people do not have to pretend to be jackasses in order for me to correct a mistake. I know that must have been difficult for you. Of course, then again, I am not the one who spends my time reading the work of a "goofy blogger."

Randy - the News Misleader has failed to provide one iota of evidence to prove Jetton "inserted" anything. All they have is hearsay and innuendo.

But then again, that pretty much describes your blog postings.

I believe the News-Leader had a direct quote from the relevant state rep. saying that Plaster inserted it. The state rep also said he would be hurt politically by telling people of Jetton's insertion. Lets get another round of applause for ignorant anonymous insertions.

I looked, the State Rep said he was told by someone else. That would not be admissable in a court of law but without such innuendo, the Turner Blog wouldn't exist.

You are the very person that spends time reading goofy bloggers, you quote them all the time in addition to being one. Oh and I am pro_Nodler!