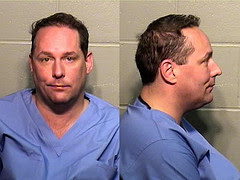 Assistant Minority Leader Chuck Graham, D-Columbia, was arrested Saturday by the Columbia Police Department on suspicion of driving while intoxicated:

A media release stated the first-term senator was taken into custody while exchanging insurance information with the drivers of a vehicle that he hit.

“Senator Graham asked for medical treatment, and was subsequently transported to the emergency room at University Hospital,” the e-mail states.

Graham was released from the Boone County Jail after posting $500 bond.

The e-mail stated said Graham would have no further comment on the matter on advice from counsel.

The Columbia Missourian offers the most complete version of the Graham arrest:

At about 9:45 p.m. Saturday, Graham, 42, was driving on Green Meadows Road near his home when he rear-ended a vehicle stopped near the intersection of Green Meadows Road and Bethel Street, Columbia police Sgt. Lloyd Simons said. The vehicle Graham hit then hit a vehicle in front of it. The airbag in Graham’s vehicle deployed, and Graham was treated and released from University Hospital after complaining of pain in his arm, Simons said. The other drivers were not injured in the crash. Both of the victims’ vehicles sustained minor damage, Simons said. Graham’s vehicle sustained moderate damage.

I love it. It's about time he met his due.