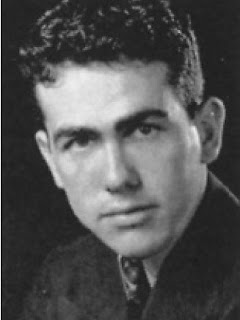 Character actor Lonny Chapman, whose family moved to Joplin shortly after he was born in Tulsa, Okla., died Oct. 12 at age 87.

Chapman appeared in more than 25 movies, including "The Reivers," "Baby Doll," and "Take the Money and Run," and in hundreds of television episodes.

Chapman was named an outstanding alumnus of Missouri Southern in 2005, and in fact, hitchhiked to New York City with his Joplin Junior College (the precursor of MSSU) classmate Dennis Weaver to begin their acting careers.
Posted by Randy at 7:16 AM

As a new graduate of the University of Oklahoma, Chapman hitchhiked to New York City in 1947 with his best friend from college, actor Dennis Weaver.
LA TIMES

Thanks for noticing that. I will make the correction.

Upon further review, we were both correct. All I said was that he hitchhiked to New York with his fellow Joplin Junior College graduate Dennis Weaver. That was accurate.

No, you weren't right.

You did not say he hitchiked to New York with his "fellow Joplin Junior College GRADUATE Dennis Weaver."

You said he hitchhiked to NYC with his "fellow Joplin Junior College CLASSMATE Dennis Weaver." That gives the reader the impression they were in JJC at the time.

Actually, Chapman had been away in the service during WW II after he finished at JJC. He came home and completed his bachelor's degree at the University of Oklahoma.

Chapman was 4 years older than Dennis Weaver. They both attended Joplin Junior College but I don't believe they were there at the same time. (When Lonny was 19, Dennis would have only been 15/16.)

They were at the University of Oklahoma at the same time, although Chapman was a year or so ahead in school.