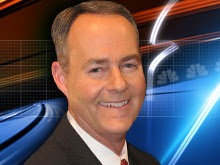 Jackson began his broadcast career in 1977 at KCTE Radio in Southwest City. He joined KTVJ TV-16 in 1980. KTVJ became KSNF in 1982. Jackson has served as the station’s main 6 and 10 pm news anchor for more than 30 years.

“I’m proud of what I’ve accomplished as a news broadcaster, and I’m looking forward to this new challenge that will allow me to make an even bigger contribution to the community.”

A graduate of Missouri Southern State University, Jackson is honored in the Media Hall of Fame. Jackson served as an adjunct instructor of communications for 11 years at Crowder College.
Posted by Randy at 3:47 AM

Thank God!!!! Whatever it takes to get Jim Jackson off my TV screen. Toni is great to look at but my God Jim really slows down the news!
I wonder if he will talk in his fake news voice as commissioner.

Who is Jim Jackson?