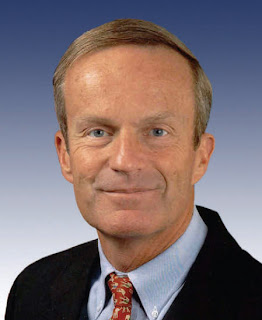 (From Congressman and U. S. Senate candidate Todd Akin)

Congressman Todd Akin, Chairman of the Seapower and Projection Forces Subcommittee, today released the following statement in response to the defense budget cuts announced by the Secretary of Defense:

“I am deeply concerned by the cuts announced by the Secretary of Defense this afternoon. Only a few weeks ago, the President announced a “pivot” to Asia, with a focus on Navy and Air Force power. However, today the Secretary announced that he is cutting at least 12 new Navy ships over the next five years and retiring at least 9 ships earlier than planned. It is stunning that the President would announce a strategy and then cut the Navy who will be called on to execute this strategy.

“I am also concerned by the announced delays to the Ohio-class replacement program. Our nuclear missile submarines are a vital piece of our nuclear deterrence, and I am concerned that this delay will put our ability to deter at risk.

“Lastly, I am deeply concerned about the 100,000 soldiers and Marines who will be losing their jobs. With a tough economy, many of these brave men and women will end up on the unemployment line. For every soldier or Marine getting fired, there had better be a government bureaucrat getting fired. The President made a special trip to the Pentagon recently to announce cuts to the Defense Department. When will the President make a special trip to announce cuts to any other federal bureaucracy? When will the President get serious about reforming mandatory spending programs, which are the real problems facing our national budget? Taken in whole, these cuts will create a more dangerous world for America and her allies.”
Posted by Randy at 8:02 PM