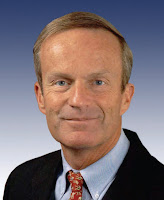 Congressman Todd Akin, Member of the House Budget Committee, cosponsored the House Resolution of disapproval of President Obama’s second debt limit increase, as provided by the Budget Control Act of 2011. The President has requested another debt limit increase to the amount of $1.2 trillion, in order to continue his rapid expansion of growth in American taxpayer debt.


“At the current pace, our national debt will exceed the size of our economy in two years. Within three years, the interest on our debt will cost our country $1 billion each day. I voted against the Budget Control Act when it passed Congress because it did little to address the exponentially increasing burden that this Administration is placing on the American taxpayer.

“It is becoming increasingly obvious that we cannot afford the amount of federal government we have today. Furthermore, I am greatly concerned at the complete disregard that the administration has in bringing our nation to fiscal solvency. We need to maintain our pledge to the American people to be responsible stewards their tax dollars and future generation’s tax dollars. I will continue to fight for both, and stand against the Administration’s complete disregard to the American taxpayer.”
Posted by Randy at 3:46 AM

I say that your blog is awesome! Happy New Year!