Some thoughts about tonight's Joplin R-8 Board of Education forum 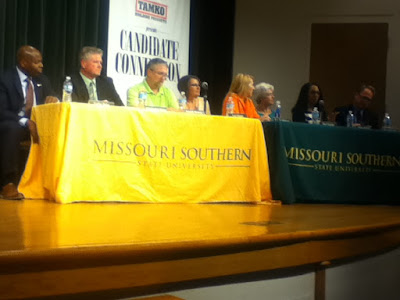 One of the problems facing the organizers of the so-called Candidate Connection tonight at Corley Auditorium on the Missouri Southern State University campus is the same one that faced the Republican Party as it began its presidential debates- when you have a large number of candidates, you don't have the opportunity to learn as much about those candidates.

The questioners did their best, varying some of the questions by asking them of candidates for the two-year seat, or the one-year seat, with some questions to going to all of the candidates, but after an hour, we really didn't learn all that much.

The most memorable line went to retired teacher Mary Gaarder, a candidate for the three-year term, who said, "I'll be a mama bear for Joplin kids." Whether that will make her a better school board member or not, I have no idea, but it was genuine and enabled her to stamp her personality on the debate.

Most thought-provoking comment- Former Columbia Elementary Principal Lori Musser, a candidate for the two-year seat, suggested that Joplin needs an alternative school, something it had before it was shut down during the Jim Simpson administration. Musser noted that an alternative school for students with severe behavior problems, would benefit the other students and would also keep those with behavioral problems in the classroom, rather than being suspended.

Comments that most needed to be said- Incumbent Jennifer Martucci, a candidate for the three-year position, while not belittling the job Bright Futures has done, noted the truth that the organization's proponents never acknowledge. "The services have always been provided." While Bright Futures supporters always talk about the work they have done to feed and clothe children, the idea that the schools were allowing these children to go hungry and naked before BF was formed is insulting.

Another comment that needed to be said- Chris Sloan, a candidate for the one-year position, questioned the amount of Bright Futures money that goes to salaries. Sloan also pointed out that the schools did these services before.

Comment that didn't need to be said-  Empire District Electric Company lawyer Sharrock Dermott, answering a question on removing bad teachers asked, "Is it all right to say I don;t know?" No, it isn't. To be fair, Dermott then answered the question, but after the response, the I don't know seemed more accurate.

A good idea- Lori Musser hit it out of the park when she suggested that we need a superintendent who has more than just a sprinkling of classroom experience. She did not say it, but part of the problem during the Huff-Besendorfer administration, was that neither had spent more than three years as a classroom teacher.

Most unnecessary statement- Again from Joe Brown, who thought it was important to say "I do not have an agenda." While obviously, you do not want to elect someone who is only running so he can get back to the coach who wouldn't put his son on the starting five- I want the people to run for school board to have an agenda- it can be something as simple as wanting to bring back an emphasis on books over technology, or something as grand as developing a plan to make Joplin the top school in the state. Give me a candidate who has an agenda over one who wants to pad his or her resume.

Final thoughts- As soon as it is available, I will post the video of tonight's forum. I appreciate all eight candidates, all of whom appear to have a sincere desire to do their part to improve education for Joplin children.

That being said, there were some things that stood out. On a question about safety,  Dermott's answer was that he would talk to other people and find out what they know. Nothing wrong with that, but he was followed by Mary Gaarder, who not only offered specifics, but also brought another dimension to the safety subject by bringing up the safe rooms that have been built. Gaarder was followed by Martucci, who clearly had done her homework and was able to rattle off a number of steps that could be explored to improve safety.

Probably the best presentation was made by Carlos Haley, a candidate for the one-year post, but while his presentation was smooth, I am not sure he was ever specific about anything. While his background at Freeman offers him some advantages as a potential school board member, I wanted to hear some concrete examples of how he was going to put that experience to good use.

Melissa Rodgers, a candidate for the three-year term, came on strong early in the debate with a knowledgeable response on the district's five-year plan and the direction in which the district is headed.

Thank you for this. It is often hard to get a lot information on school board elections, any information is helpful.

Part of the issue with hiring is that you have a COO that knows nothing about eduction. She has no education degrees, and only sends over to principals who looks good on paper, which is mainly new and inexpensive teachers. They need to eliminate that position entirely, hire 2-3 secretaries to manage HR. When applications come in for a position that is open say at Columbia, they send over all of the applicants that are qualified for that position so that the principal can hire whom they want in their building. Empower the principals to put in the people they need in thier building. Not the select chosen few that a person without any educational certificates help hire new teachers.
And as far as the Oliges question, yes, because there are so many new teachers, there probably are some who were desperate for a job and maybe are not good teachers. Again, that needs to be an empowerment with the principals to decide who is and who is not in thier building.
And if JD moves to another administrator position, God help us all.

I appreciate this as well.

I paid my first subscription today to the Turner Report because I appreciate your work, though I don't always agree with your views :)

As far as I can tell, you're the only one who has reported on the candidates, so please keep it up!

I was at the forum and Musser, Martucci and Sloan stood out. Very prepared. Haley was also impressive. He was articulate and prepared as well. Gaarder reminded me of Anne Sharp. A cheerleader. Following the status quo. Melissa Rodgers was pleasant, but did not over impress. Dermott is a Mikey and CJ guy. Very easy to see through. Change is still in the works. Cannot believe that the Globe would mask a forum on a night when parent/teacher conferences were going on. Third Thursday and St. Patrick's day. Almost like they wanted no turn out.

Turner must be off its feed because Turner didn't mention someone whose name rhymes with "BJ Puff" once.

I was hoping to hear answers to questions such as the following:

"Would you have fired that scumbag Randy Turner for violating school board policies?"

"Should teachers be allowed to teach whatever they want to teach or is that why there is a curriculum?"

"Do you favor hiring inexpensive new teachers who will do what they are told without any whining or back-biting as opposed to making up a bunch of stupid blogs whining about how they know more than elected school board officials?"

"Do you actually think you know what you are doing or are you so pathetic that you read Turner's blog in order to get your marching orders like a real idiot?"

These people are running for school board as opposed to playing "Edumacational Squeal of Fortune" and wanting to buy a clue from disingenuous nit-wits with an ax to grind which actually belongs firmly implanted in theys' pointy little heads.

Of course the Globe had this on a day with so many other activities! Carol Stark is tied to the old guard/rich clique running CART and Connect2Culture and other non-elected groups who are sure they know what is best for the rest of Joplin. They are pushing Gaardner and Dermott and have a plan to bring back Huff. The Globe coverage of the meeting is very thin, and face it--not many have the patience to watch the video. They are the same bunch that brought us Speck and Wallace-Bajali--yep, they sure know what's best for us!

why does CJ even live here anymore? Good riddance pal.

Yes, Martucci was rather crisp and well prepared at the 2015 Forum as well. Then I watched her bumble, stumble and not have a clue in the meetings. That is, until her husband, Fort or Turner would send her a quick text on what to do next. The Empress has no clothes.

I don't know her background. Has she ever held a job? Just curious if she can relate to the struggle of others. Listening to her I highly doubt it.