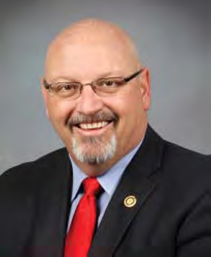 In the final weeks of session, we are hearing a lot of Senate bills on the House floor and few of our own House bills are moving. Sponsors are hoping their amendments can survive joint Senate/House conference committees. We are also busy in committees hearing House bills that members want heard even though they won’t pass this year.

The biggest thing that happened this week was the hearing and committee vote on Senate Resolution 39; the so-called “Religious Freedom” bill. This legislation did not pass out of committee. If passed it would have put this issue on the ballot and I think the voters would have eventually voted it down. It passed the Senate, also known as the “deliberative body” in less than two weeks after being introduced.

Thirteen years ago my former colleague and I put into statute these same protections. Since then, no one in the state of Missouri has lost a lawsuit and no minister has ever been forced to perform a same sex marriage.

SJR39 was poorly written and possibly unconstitutional, and the only reason to pass the bill was to boost our religious base. Many people don’t realize that Missouri is one of the few states where you can legally fire someone if they are gay. I would question anyone that doesn’t think that this is strong enough discrimination policy. I believe that this issue would have been viewed by most as just hate.

I don’t think that was the supporters’ intent, but the result would have been a “summer of hate” with millions of dollars spent by nearly every large corporation in the state that have already come out strongly against the bill. Missouri would have been the focus and laughingstock of the national press again. After Ferguson and the recent issues at the Mizzou campus, this would have been devastating. Even if the vote were successful it would've only achieved the result of putting in the constitution what are largely protections that are in our statutes already.
Posted by Randy at 7:23 PM