Koch, Martucci to head Joplin R-8 Board of Education 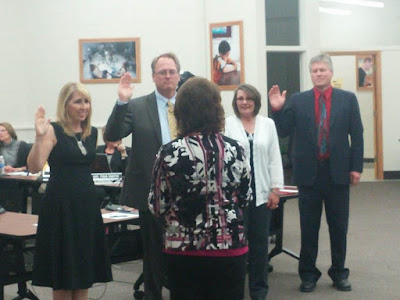 One year ago, board member Lynda Banwart blocked the election of Debbie Fort as board president. When Fort was trying to convince Banwart she would be a good president, Banwart told her, "I see you not being able to work with other people."

That impression, Banwart said, came because Fort had "forced" former Superintendent C. J. Huff into attacking her because he was "very protective of his leadership team."

At the time, Banwart's response stunned the Joplin community since Huff had bullied Fort since her election to the board in April 2014 and Banwart was saying that Fort had brought on the attacks by displeasing the man who was bullying her..

What a difference a year makes.

After the swearing-in ceremony for newly-elected board members Jennifer Martucci, Sharrock Dermott, Lori Musser, and Chris Sloan tonight, nominations for board president opened with Banwart saying, "I nominate Debbie Fort."

Unlike last year, Fort has a new position at work that requires more of her time, so she declined the nomination. Fort nominated last year's board president, Jeff Koch, who was elected unanimously.

As the first one nominated, the Martucci vote was held first. After six board members, including Dermott, voted "yes," Banwart said, "OK, yeah," and it was unanimous.

The meeting began with a presentation of lifetime passes to Joplin R-8 activities to departing board members Sallie Beard, Ron Gatz, and Gary Nodler, who were appointed by the Jasper County Commission in June to replace Lane Roberts, who was unable to serve because of his appointment as director of the Missouri Department of Public Safety and Mike Landis and Randy Steele, who quit when things stopped going their way.

The meeting took a total of 15 minutes, ending with Interim Superintendent Norm Ridder jokingly saying, "I want everybody to tell Gary Nodler about the shortness of this meeting."

Linda...you must think Fort,Martucci, Sloan and Koch are stupid. They can read you like a book. Take note of the vote because You're going to be seeing a lot more just like that.

More like what a nice change. Honest people. Refreshing.

If you think Fort, Martucci, Sloan and Koch are the honest people then I have some ocean front property for you in Webb City,

I believe Koch is, don't really have an opinion on Sloan, but I know Fort and Martucci are not. Especially Fort. That vindictive, petty, unethical woman is a wolf in sheep's clothing.

Pastor Sloan is one of the most honest, caring and respectful people i know. What you see is what he truly is. A GOOD PERSON! As is Mr. Koch and Mrs. Fort. The fact that you speak ill of a godly man that you more than likely know nothing about shows what kind of person you are.

Now Huffy, you don't need to go away mad, just get the hell out of here. This vote shows your days are over and good riddance. Take your little puppet Mikey with you. Maybe you should check and see if Siberia needs a bad superintendent.