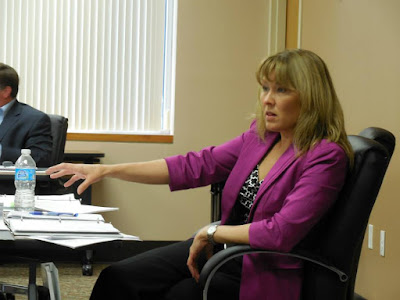 The controversy surrounding the romantic relationship between the $400,000 a year superintendent of the Lee's Summit School District and the school district's attorney continues.

An angry group of parents attended the Board of Education meeting this week demanding that the district sever its relationship with the Guin Mondorf law firm because of Superintendent David McGehee's romance with attorney Shellie Guin.

Guin Mondorf has worked for the Joplin R-8 School District on two recent high profile cases. During the summer of 2015, the firm represented the district against a lawsuit filed by three Joplin residents seeking to overturn the Jasper County Commission's appointment of Sallie Beard, Ron Gatz, and Gary Nodler to the Board of Education.

In May 2013, Guin served as the prosecutor in my termination hearing.

The Lee's Summit board intends to retain Guin Mondorf. The district spent $13,000 to hire two outside law firms to conduct an investigation into whether there was a problem. Unbelievably, the investigators said there was no problem since the school district was using other lawyers in the firm to conduct its business and not Guin.

Of course, Guin being a name partner in the firm would still be profiting from the school district's business.

The board voted 4-3 to keep Guin Mondorf.