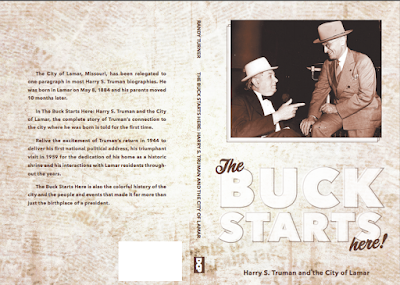 The publication date for my book The Buck Starts Here: Harry S. Truman and the City of Lamar is rapidly approaching.

This will be the cover and back cover of the book (with my name added on the front cover).

The book is approximately 260 pages and includes many photos courtesy of the Truman Library and Museum in Independence, the Barton County Historical Society, Truman Birthplace and Lamar residents.

My research for the book began early this year, but it has been something I have been thinking about since the Truman Centennial in 1984. When I began my research, I was concerned there would not be enough material to warrant a book and fully expected to have something more along the lines of a lengthy pamphlet.

It only took me one afternoon to realize there was plenty of material for a book.

Though Truman visited Lamar only a handful of times after his family left the city in 1885 when he was 10 months old, his connection to Lamar was much deeper than that.

The book not only chronicles Truman, but as the title indicates, it is also about the City of Lamar and covers the period from 1870 to today, with a particular emphasis on the 1882-1885 period when John and Martha Truman lived in Lamar, the 1940s as Lamar and the nation deals with World War II and Harry Truman returns in 1944 to deliver the most important speech of his political career to that point, and 1959 when Truman made his final visit to the city.

In addition to Harry Truman, The Buck Starts Here tells the stories of Lee Chiswell, a politician on the rise who left the arena to start the Lamar Democrat, the Earp family beginning with Lamar's first city marshal Wyatt Earp and then detailing its history during the three decades in which it owned the
Truman Birthplace and Claude "Brother" Adams who took his Missouri mules to Pennsylvania Avenue to represent Lamar at Truman's inaugural parade in 1949.

The book especially deals with the stories of five people- war hero and prisoner of war Richard Chancellor, newspaper publishers Arthur Aull and Madeleine Aull VanHaffen, Gerald Gilkey, the longest serving mayor in Missouri history, and reporter/author/historian Marvin L. VanGilder, as they interacted with Truman's life and politics and as they made their own valuable contributions in shaping Lamar into the city it is today.

For those who want a sample of what is in the book, I am offering the first 80 pages or so, slightly less than a third of the book, as a free PDF attachment. Contact me at rturner229@hotmail.com, leave a comment with your e-mail address or get in touch with me on my Facebook page or on the Inside Joplin Facebook page.