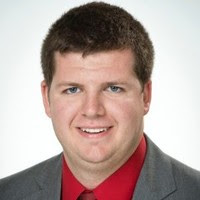 Popejoy, 28, Arma, Kansas, who faces a felony statutory sodomy charge, was placed on leave that day and the Webb City Police Department began its investigation.

Popejoy, who teaches math and science and is in his sixth year in the R-7 School District, was arrested Friday at the school when he stopped to pick up his belongings and is being held in the Jasper County Jail on a $100,000 cash-only bond.

His arraignment was scheduled for 12:30 p.m. today in Jasper County Circuit Court. This post will be updated to reflect the results.

The Buck Starts Here: Harry S. Truman and the City of Lamar, the first book to tell the story of the 33rd President of the United States and the city where he was born is available now in paperback and e-book formats from Amazon.com at the links below or locally at the Lamar Democrat office in Lamar and Changing Hands Book Shoppe, The Book Guy and Always Buying Books in Joplin.

It saddens me that you choose to publish the graphic details. It is a matter of public record, however, does it need to be in a blog. The victim is a junior high kid. Does he need for the details to be published? You have lost your heart for people. Seriously, read your headline. You know the culture of the junior high kids.

As sickening as it is, yes it does need to be described.

Maybe if enough dirty details were given in ALL these child abuse cases, voters would finally demand lawmakers, judges and prosecutors make the consequences much harsher.

At the cost of the victim?

Unless I am wrong, the victim's name has not been published (nor should it be). As others have said, maybe if these people were shamed to an appropriate level, this kind of behavior would be less commonplace. Also as others have stated, this information is public knowledge. I also doubt this blog gets the traffic of the Globe or other sources. The victim likely has never heard of Randy Turner.