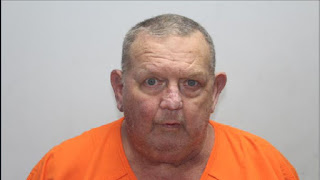 A retired priest whose last assignment was at St Mary's Catholic Church in Lamar waived his arraignment and pleaded not guilty in Stoddard County Circuit Court Thursday to felony charges of forcible sodomy, sexual abuse and two counts of statutory sodomy.

The charges involve crimes that took place in 2000.

The probable cause statement alleges Lutz was drinking and watching gay pornography, tried to get a 17-year-old boy who was working in the St. Joseph Parish rectory in Advance, Missouri, to drink with him. After the boy refused, Lutz allegedly kept him from leaving and forced him into an oral sex act.

He let the boy leave after the boy promised to bring marijuana to him the next day.

The teen told his father, who notified a religious education teacher. Later, Lutz called the father to his office and apologized, telling him that he was drinking and just broke up with a boyfriend who lived with him at the rectory, according to court documents.

Court documents show investigators also learned of a 1972 incident in which Lutz allegedly attended an event with another man and a 17-year-old boy.

When the boy went to Mass on Sunday morning, Lutz handed him a Bible and told him “what happened never should have happened,” according to court documents. Then he wished the boy “good luck” in college.

In addition to Lamar, Lutz served as pastor in Greenfield, Mount Vernon, Pulaskifield and Cassville.

I hope that this information gets to the Vatican. There are no words left in my vocabulary to describe the feelings that many, many children must be experiencing as a result of perverted religious leaders.

Should we have a local atheist committee to license wingnut pastors and priests and pass judgement on churches?

Also the Southern Baptists also have a number of sex abuse problems (just ask Kenneth Starr and or Baylor), so I'm sure Brother Ben is also on this like a fly on sh

Hyacinth, the Vatican has nothing to do with it at this point. Hiding behind the church isn't gonna save him any more, and there's nothing the church could do to punish him that can't be handled in gen pop.