(From the U. S. Attorney for the Southern District of Missouri) 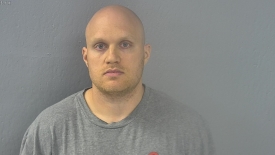 A Cassville High School business teacher who had taken a position with the Hollister School District for the 2020-2021 school year has been charged with sexual exploitation of a child after allegedly blackmailing a 14-year-old girl and nearly driving her to suicide.

Brandon Lane McCullough, 31, Branson, was charged Thursday in a criminal complaint filed in the U.S. District Court for the Western District of Missouri.

The allegations were spelled out in the probable cause affidavit:

Kik reported that a user, username “brianmagee8809,” was involved in chat in which suspected images of child pornography or erotica were uploaded.

Kik provided a portion of a chat log, between user “brianmagee8809” and an undisclosed user (hereinafter “User X”), and images uploaded during the chat on May 27, 2019.

During the conversation, User X reported that she was a 12-year-old female. User X also uploaded two image files during the conversations. Kik sent the images, which they had already viewed, with the lead. This affiant reviewed the images, which both depicted a close-up of the exposed left breast of a female. No other parts of the body, including the face, were included in the image.

Based upon what was visible in the two images, this affiant was unable to confirm the images to be of a minor less than 18 years of age.

After User X uploaded these images, the “brianmagee8809” user stated, “I’m posting your pics.” That concluded the portion of the chat log sent by Kik.

On February 14, 2020, this affiant spoke with Florham Park Borough, New Jersey, Police Department (FPPD) Detective Sergeant Michael Neilan. Detective Neilan stated he was investigating a case where the suspect may reside in the Southwest Missouri area.

Detective Neilan explained that a 14-year-old minor female (hereinafter “Jane Doe”) who resided in New Jersey had engaged in a series of conversations on Kik with an individual who went by username “brianmagee8809.”

Based upon their investigation, the IP address for “brianmagee8809” resolved back to a residence in Branson, Missouri. FPPD forwarded a copy of their report to this affiant.

The “brianmagee8809” user threatened to send the sexually explicit images and videos of Jane Doe to her family and friends.

The “brianmagee8009” user tells Jane Doe that he is 15 years old male. The “brianmage8809” user then asks Jane Doe where she lives, her dating history, if Jane Doe is a virgin, what sex acts Jane Doe has performed before, and for images of Jane Doe’s “booty.”

Jane Doe tells him that she does not send nude images to strangers, and “brianmagee8809” then sends an image of a nude male with his penis exposed. Jane Doe asks the “brianmagee8809” user if she can send one later and if he has “snap or smith.”

Jane Doe then sends images and videos of herself engaged in sexually explicit conduct.

The “brianmagee8809” user makes statements such as, (note: the statements were so vile and obscene they are not going to be printed on this website).

Jane Doe repeatedly pleads with “brianmagee8809” to stop, telling him, “can you please j leave me alone now,” “what happened to leaving me alone after I send an ass pic,” “you’re an awful person,” “can you j stop,” and “I like don’t wanna do that.”

Jane Doe begs him to reconsider and he tells her they will talk later.

On the next day, May 26, 2019, the “brianmagee8809” user continues to coerce Jane Doe and demands more images and videos of her engaged in sexual acts with other people. Jane Doe finally tells “brianmagee8809” that she is considering killing herself because she feels trapped and she does not know what else she can do, to which he responds, “That’s ur choice.”

Jane Doe tells “brianmagee8809” that she took half a bottle of her mother’s pills.

Law enforcement also located another Kik conversation that occurred between Jane Doe and an individual using username “t. Hollins Tyler Hollins,” who identified himself as a 17-year-old male. The “t. Hollins Tyler Hollins” user initiated the conversation with Jane Doe on May 25, 2019, at the same time as the one with “brianmagee8809” was occurring.

Jane Doe increasingly becomes desperate and on May 26, 2019, tells “t. Hollins Tyler Hollins,” “its either him exposing me or me killing myself and not having to deal with it I like don’t have any other option.”

After that, “t. Hollins Tyler Hollins” encourages Jane Doe to continuing meeting the other Kik user’s demands, and Jane Doe accuses him of being the same person.

The MCPO sent investigative subpoenas to Kik, Snapchat, and Google for subscriber information. Through the course of the investigation, law enforcement determined that the “brianmagee8809” user and the “Tyler_smith1785” user were utilizing the same IP address during the conversation with Jane Doe which was registered to Leslie McCullough at a residence in Branson, Missouri.

The Kik lead received by this affiant also indicated that the “brianmagee8809” user’s IP address on May 27, 2019, while chatting with User X was the same as when he was communicating with Jane Doe.

Through the course of the investigation, this affiant discovered the subscriber for the IP address for the time-frame the user was communicating with User X was also Leslie R. McCullough with the same address in Branson, Missouri.

This affiant conducted a records search that showed that the residence in Branson, Missouri belonged to Brandon L. and Leslie R. McCullough since May 31, 2018.

On April 30, 2020, this affiant applied for and received a search warrant for the McCullough residence in Branson, Missouri, from Chief United States Magistrate Judge David P. Rush, Western District of Missouri.

On May 7, 2020, this affiant, as well as other members of HSI and the Southwest Missouri Cyber Crimes Task Force (SMCCTF) executed the search warrant. Upon arrival this affiant made contact with Leslie McCullough and informed her that they were there to execute a federal search warrant.

She informed this affiant that her husband, Brandon McCullough (hereinafter “McCullough”) and her two children were inside the residence.

While McCullough was interviewed, other law enforcement searched the residence.

At the beginning of the interview, McCullough provided his background information and stated he was a high-school business teacher at Cassville High School. McCullough at first denied any conduct relating to the investigation. This affiant exited the vehicle to see what devices had been located inside the residence.

After this affiant exited the vehicle, TFO Martin confronted McCullough with what had occurred with Jane Doe and that she had attempted suicide. At that point McCullough stated, “it’s me, I did it.”

TFO Martin asked him if he was just saying that and McCullough replied, “no, it’s me I did it.”

This agent was informed that a Seagate Slim Portable 500GB external hard drive had been located concealed under a basket, which was under a sink in a bathroom on the basement floor of the residence. HSI TFO Larry Roller and TFO James Smith had begun a forensic preview on the external hard drive and located dozens of Kik folders, which within each folder were Kik chats and image and video files received through Kik.

This affiant reentered the vehicle and confronted McCullough with the hidden external hard drive and the Kik folders. McCullough admitted the hard drive was his. McCullough further stated in May 2019 he was using a cellular phone, a Galaxy S5, to access the Kik application.

McCullough claimed he destroyed the cellular phone because he was attempting to stop his behavior and it was too much of a temptation.

McCullough stated he had used many Kik user names, but could not recall them all and it was possible he had used the "brianmagee8809" user name.

McCullough could not recall how many minors he had chatted with and how often he had done it because he was engaging in the conduct so frequently.
Posted by Randy at 7:15 PM