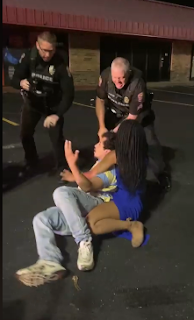 The Joplin Police Department says it is reviewing an arrest at 110 N. Range Line Tuesday in which officers used force.

(Note: The complete Facebook message and the video, which was taken with a cell phone, are embedded below and both contain considerable profanity.)

The timing of the incident couldn't have been worse with the nation's attention focused on issues involving use of force by police officers following the murder of George Floyd in Minneapolis last week.

The JPD news release is printed below:

There has been a cell phone video of an arrest at 110 N Range Line Rd that has been circulating on social media. Officers responded to a disturbance call after midnight on June 2, 2020.

Upon arrival officers contacted a group of individuals that advised the disturbance was over. Officers were allowing the individuals to leave the lot when one officer observed a female who was unconscious and unresponsive as the result of an assault.

Fire and EMS responded to treat the subject.

At one point during the treatment of the victim, a male subject approached the victim and was told several times to back away from the victim. The subject refused these requests from the officer and was arrested.

The arrest led to additional arrests by police, as additional individuals attempted to intervene in the arrest of the subject.

Since the incident, our department has also received additional information and evidence concerning the felony assault and an additional assault that occurred. A felony assault investigation is currently ongoing as more information is being followed up on. The incident involved use of force, and by our department policy every use of force incident is reviewed.

Our department also received a citizen complaint arising from this incident. By department policy this complaint will be investigated as well.

JPD....at their best.
First, Tingley.
Then, Crosthwait.
Yeah, not even surprised that there would be some overstep and lack of protection.

JPD at its finest come on now. Corrupted since the early days look into the police history of this town.They've had the cop that taserd the guy to death while he was already unconscious.Lets see less than a yr ago 2 JPD cops 1 unarmed mentally unstable man killed by JPD UNARMED who shoots a unarmed mentally challenged individual?JPD will shoot first ask questions later. And they already trained in what to say when they shoot someone. What is it they say they feared for their lifes.Comn now people wake up smell the coffee!!!

Why would you want to stop police from trying to check on a individual who is unconscious and non responsive at a disturbance call? Speculation... they dod not want the female to identity who rendered her unconscious? Give me another plausible explanation. If police give you a lawful command, obey it. No excuse.they were gonna let everyone leave , so you cant say they went there to cause trouble. You can say the crowd disobeyed lawful orders.

He was obeying lawful orders and was maced and tazed for it.

I WOULD LIKE TO KNOW HOW HE WAS OBEYING LAWFUL ORDERS? IF THE POLICE ARE TRYING TO DETAIN YOU FOR AN INVESTIGATION YOU CANT JUST HAVE SOME FEMALE HANGING ON TO YOUR BACK WHILE THE OFFICERS ARE TRYING TO DO THEIR JOB. I DONT KNOW WHERE PEOPLE THINK THEY DONT HAVE TO OBEY OFFICERS ORDERS WHEN THE OFFICERS ARE JUST TRYING TO DO THEIR JOBS. PEOPLE BE ACTING STUPID ACTING LIKE LAWS DONT APPLY TO THEM. CLEARLY THE SUBJECTS IN THIS VIDEO WERE ACTING STUPID AND MAKING THE SITUATION A LOT WORSE BY ACTING LIKE CHILDREN WHEN THE OFFICER'S WERE TRYING TO INVESTIGATE A BATTERY ASSAULT. PEOPLE ARE SO STUPID. EVERYBODY IS ON THIS GEORGE FLOYD SITUATION BUT NEWS FLASH EVERYBODY NOT ALL COPS ARE USING EXCESSIVE FORCE THEY ARE JUST DOING THEIR JOB.

It's well past the time for us to rise up against these authoritarian bullies. We've got the numbers, they can't arrest all of us.

Just investigate all Police Depts. Get rid of all the rotten apples! I had alot of issues with Police. I'm a survivor of Domestic violence and that was no help from the law. I begged for help but no one helped me or cared. Took reports but that's it. I almost died when my husband ran me off the road. Oh by the way, yes my Ex was a cop too! Evil sticks together!!!!!

Randy, YOU are a part of the problem. I posted something yesterday on here that wasn't bashing law enforcement. Where is it? You only allow negative comments? You love bashing police until someone shows up at your door and punches you in the face. Next time don't call a cop.

These law abiding citizens were just minding their own business when JPD rolled up and decided to mace one taze the other? There always more to the story

I did not delete any comments. I receive an e-mail notification each time a comment is posted on the Turner Report. After I posted your comment, I checked the list of pending comments on blogger and found that three comments, two for this post and one for another post were either not e-mailed to me or I accidentally deleted the e-mails. All three have been published and I am hoping one of those comments is yours. There were some others I did delete due to excessive profanity.

Wtf. Looks like a bunch of idiots interfering with a legit police call. Don't you fools know when the police show up to get the hell out of the way and answer all questions with yes sir, yes ma'am, no sir, no ma'am. Dude that got tased had it coming by walking up and acting like a badass. See what happened to him? Dude who got maced and tased was resisting arrest. See what happened to him? The cops seemed cool by not body slamming blue dress girl. She totally should have been cuffed up.