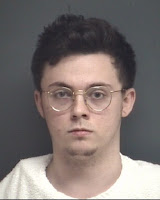 A Joplin man arrested earlier today on a felony child abuse charge slapped, chocked and punched a two-year-old leaving the child in critical condition, according to the probable cause statement.

The child was flown to a Kansas City hospital for treatment.

Brian O'Grodnick, 22, captured the abuse on video, according to the statement.

An arrest warrant was issued for O'Grodnick, who will be held without bond.

The information from the probable cause statement is printed below:

On multiple dates in 2020, Brian O'Grodnick committed the offense of abuse of a child at (an apartment) at 1920 E. 8th Street, Joplin, Jasper County, against a two-year-old child.

On April 20, 2020, O'Grodnick pinches the face of (the child) forcing the corners of his mouth to touch then shoves him by his face.

On April 21, 2020, O'Grodnick again pinches (the child's) face while forcing him to make statements then slaps him in the face.

On April 22, 2020, O'Grodnick chokes (the child) with one hand around his throat while he is made to beg for water.

Also on April 22, 2020, O'Grodnick puts his fist up to (the child's) face lightly two times then on the third time he punches (the child) in the face.

All of these incidents were discovered on videos on O'Grodnick's cell phone. O'Grodnick admitted to making the videos and performing the abuse against (the child) under Miranda.

In the videos, (the child) is observed to have multiple bruises and scratches on his face and chin and is crying and shaking.

The investigation that led to O'Grodnick's arrest began after officers responded to a call to the apartment at 1900 E. 8th Sunday morning.

On May 31st, 2020 at approximately 9:32 A.M. Officers with the Joplin Police Department were dispatched to the 1900 block of East 8th St. for a 2-year-old male child not conscious and not breathing.

Responding officers started life saving measures upon arrival. The child was transported to a local hospital where he was later transported to Kansas City, MO for treatment.
Posted by Randy at 2:55 PM

I hope this Scum Receives Similar Treatment and Worse in Jail - - for hurting a Child - - No Excuses - and if the DA - - Tries to make a Deal with his Attorney then we need to remove the DA from our Court Systems.

I hope the 2 year old boy recovers. As for Mr O'Grodnick, no punishment that could be levied is harsh enough for this scumbag.

I want to know what’s gonna happen to mom? Surely she noticed the scratches and bruises!

Public hanging should be brought back as a form of punishment for criminals for this very type of behavior. When there is no doubt that the person committed this type of abuse public hanging within 30 days of the crime. No appeals and no exceptions.

And where's mom?
It'll will all be fine when DFS finishes their family reunification--NOT!
Bless this poor kid.

Omg I hope he gets his in prison . Poor Baby

Poor baby . Multiple videos ..
Didn't mom see anything . Hear anything . This is so sad . So sad .

I happen to know the mother and there is more to it than you know. She had him seen for the bruises and scratches. It was thought it was from him being a clumsy 2 year old. It's easy to judge mom, but she had no idea this was going on. She's devastated. This man is a monster.

So was this precious 2 year old boy left with this monster sick person on several occasions. You've got to really know someone before you leave your kids in their custody. This happens way to much. Ex boyfriend. Why was he still around and especially watching the boy. I mean the mom wasn't there right? Cause if so it surely wouldn't have happened. This just makes me so mad. Poor sweet boy. Pray to God he makes it.

To everyone that'll see this article and instantly think "Where was the mother, during all this!?" I say this to you: She did not know any of this was happening, AT ALL! She took him to the doctor for the cuts and bruises and they passed it off as clumsy child behavior. The mother happens to be a really close friend of mine and I treat her as a member of my family, like my own sister, so I can say with 100% certainty, that if she thought for even a single second that her baby was in danger, AT ANY POINT, she would have NEVER left him alone with this disgusting man or even considered moving in with him! She would only leave her baby alone with this terrible man for maybe 10 minutes or even 15 at most to take a shower or make food for him, if he started crying she immediately attended to it, because she is a wonderful mother! This disgusting excuse for a human being had everyone fooled that he was a nice guy and would never do anything wrong to that baby! Please do not instantly judge someone based on one side of story, because you don't know the whole picture!

Yes she did notice the scratches and bruises and took him to the doctor. The doctor said the bruises or from a clumsy two-year-old. Everyone needs to stop being so judge mental Gracie is a very good mother

Sorry but no excuses!!!!
That baby I guarantee was afraid of him and showed signs.

and let the public give him a sentence. He needs punished and made to suffer before he is sentenced to death.

Sure he did and he had everyone fooled for 10days of this abuse ... And he didn't coward to him nor was the Dr smart enough to tell these bruises on this sweet baby boy was from innocent child play BS! Sue the Dr then and help pay for his stupidity of it all ... Shame on the ones that failed him MISERABLY!! RIH Jameston God has you now ... No one will fail you now ... I'm so sorry for the pain you endured from this jacka** and the Mom that failed you miserably... Fly High Baby Boy 👼👼👼 sigh 😭😭😭💔💔💔

Well you better Sue the Dr then cause these injuries you could tell was not from clumsy play or from seizures at all ... Anyone that seen this sweet baby boy coward to this inhumane POS would of known ... I call BS on your Granddaughter not knowing he was abusing this sweet baby boy ... Mothers have GUT INTUITION about their babies for a reason ... God blessed them w that as being a Mother ... She failed him miserable and God don't like ugly ... My condolences to the family that loved him and now no longer have him but your Granddaughter was blessed from God w one of the BEST and she let this EVIL SATAN SPAWN POS do horrible things to her blessing ... Anyone can look at the pics of him in the hospital and tell that he was being ABUSED! She failed him MISERABLY! God don't like ugly ... ������