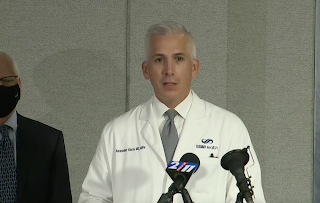 “Unfortunately, as has been painfully obvious to even a casual observer, we are past the time when individual behavior alone can address this disaster,” Garza said during a briefing Friday.

He later added: “Make no mistake. We’re at war. And right here, right now, the virus is winning that war.”

With cases and hospitalizations at all-time highs, Garza said the state must act to ensure hospitals across the state won’t have to turn patients away — like some already have. Increasing the use of masks and urging residents to stay home as much as possible will slow the virus’ spread and give healthcare systems a chance to stay ahead of rising cases, Garza said.

Without such measures, Garza predicted that the number of COVID patients in Missouri’s hospitals may double in about two weeks. The four major health systems in the task force reported Friday that the seven-day moving average of hospital admissions increased to 105 — a new record.

Statewide, the seven-day averages of cases, positive rate on tests and hospitalizations are all at their highest levels of the pandemic. As of Thursday, 2,462 patients were hospitalized for COVID-19 according to the state’s dashboard — a nearly 51 percent increase from the 1,632 hospitalized Nov. 1.
Garza’s call for increased restrictions was echoed Friday in a joint statement from six public health directors in the Kansas City area.

At a minimum, local governments should continue mask mandates for residents when in public, limit gatherings, require bars and restaurants to close by 10 p.m. or restrict occupancy levels, and limit attendees at sporting events, the health directors recommended.

“…we fully understand the impact that stay-at-home orders have on our local economy,” the statement from Kansas City-area health directors read. “However, COVID-19 transmission cannot continue to rage out of control in our community given the severe strain on our health and medical systems.”

In Columbia, officials painted a grim picture Friday afternoon. Mayor Brian Treece said case investigators are sometimes as many as 10 days behind, city services are being disrupted because employees are out due to COVID and 75 percent of positive cases in Columbia’s hospitals are from counties without mask requirements.

On nine of the last 10 days, the Columbia/Boone County Public Health and Human Services Department has reported more than 100 new COIVD cases. Prior to those nine days, there had been eight total days since March with 100 or more cases.

Public health Director Stephanie Browning dropped down a large stack of papers, which represents the number of new positive cases in Boone County just this week.

“These are people’s lives that have been impacted,” Browning said. “Simply put, this is out of control.”

Browning announced Columbia and Boone County’s health orders would be extended for three weeks through Dec. 8 — with no new restrictions added. The orders require bars and restaurants that serve alcohol to close by 10:30 p.m. and limits public and private gatherings to 20 or less, unless in an approved large venue where groups up to 100 may congregate.

Missouri has never been under a statewide mask mandate. Parson has left the decision to local officials, noting the many of the state’s largest metro areas are already under local mandates.

“When it comes to the virus, we are all one big county now,” Garza said. “Every day, COVID patients are crossing county lines to go to hospitals. The lack of a mask mandate in one county, has implications for residents and health care professionals in other parts of the state.”

As Parson has resisted calls for a statewide mandate, he has continued to stress the need for personal responsibility, while acknowledging that “we can’t keep expecting the hospitals to meet the demand.”

“The reality of it is we can’t keep going at the pace we’re going and keep doing the same old things we’ve been doing,” Parson said during a press conference Thursday, in which the state relaxed quarantine guidelines for students and teachers.

Students in districts with mask mandates may no longer have to quarantine after being exposed if both individuals were properly wearing a face mask at the time, according to the new guidance.

In a news release Thursday, Cole County announced that it would only do contact tracing for cases tied to schools and that going forward individuals who test positive for COVID-19 will be responsible for notifying those they were in close contact with.

The county, which is the seat of state government where the Capitol is located, cited a rise in cases, the need to expedite mitigation strategies and resistance it was meeting from residents when contacted. Cole County has the highest per capita infection rate in the state so far this month.

Larry Linthacum, the superintendent of the Jefferson City School District, said in a statement Friday that Cole County’s decision raises questions regarding the district’s quarantine and employee leave processes, as well as the ability to keep schools open.

“From a safety perspective, the idea that contact tracing will no longer be conducted by the public health entity in Cole County creates a lot of uncertainty,” Linthacum said. “When you remove that layer of protection and leave contact tracing up to citizens, it may lead to more students and staff members who have been exposed to the virus coming to school and unknowingly transmitting it to others.”

In a letter sent to families and staff, the Jefferson City School District expressed concern about Thursday’s announcements and said that at the time current procedures will not change.

Parson said Thursday “the next four weeks are critical,” and public health experts warn that gathering amid the upcoming Thanksgiving holiday and inside due to colder weather could increase the virus’ spread.

“These will be the most challenging months in the pandemic,” Garza said.

The Independent’s Jason Hancock and Rudi Keller contributed to this story. This story has been updated since it was first published.
Tessa Weinberg covers education, health care and the legislature. She previously covered the Missouri statehouse for The Kansas City Star and The Columbia Missourian, where her reporting into social media use by the governor prompted an investigation by the Attorney General’s office. She most recently covered state government in Texas for The Fort Worth Star-Telegram.
Posted by Randy at 5:50 PM

"Parson said Thursday “the next four weeks are critical,”"

....but I as Governor will do nothing to help control this.

In other words, everybody is on their own. Stay home when you can and wear a mask when you are out in the public.

And when you see someone who refuses to wear a mask, just walk up to them, pull your mask down and COUGH!!"😷

To 6:08, Then proceed to get your leftist teeth, knocked down your throat.