Obama opens speech with series of thank-yous- what no John Edwards? 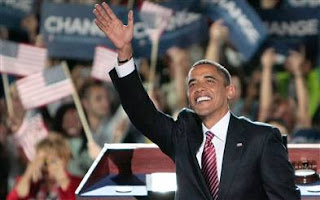 Barack Obama opened his acceptance speech at Invesco Stadium in Denver by thanking those who joined him in the Democratic primaries, but mentioned only two by name.

Obama started by thanking the candidate who stayed in the race the longest, Hillary Rodham Clinton, and concluded the opening portion of the speech by thanking his vice presidential candidate Joe Biden.

Perhaps all of them would have been mentioned, but that would have meant mentioning the only unspeakable name of the 2008 Democratic National Convention, the philandering John Edwards, a man who only four years ago was standing alongside John Kerry as the vice presidential candidate and who this year is skulking around hotel rooms visiting his mistress (and quite possibly the mother of his child).

That meant giving short shrift to such people Chris Dodd, Bill Richardson, Dennis Kuninich, and God help us, even Mike Gravel.
Posted by Randy at 7:18 PM