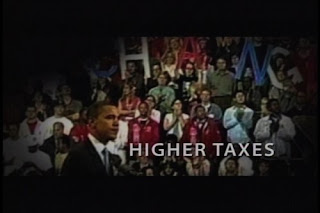 The word is "change," but when KFJX news anchor Michael Hayslip spotted it in a John McCain ad, two letters were gone and the McCain ad, featuring an attack on Barack Obama took on a much more sinister message:

Take a look at the crowd above Obama, who during this original campaign stop were holding individual letters to spell out "CHANGE".

But the way the ad runs, there's a dark shadow through most of the "C", and the "E" at the end of the word.

Take out those two letters, and you have a new word right above Barack Obama's head.

We asked the McCain campaign about the image. Their response: "We're not even validating such an outrageous and preposterous claim with a comment."

The E is out of the frame, and could be explained away. But the C is obviously deliberately shadowed over. Of course it is only on the screen for a short period of time. It's subliminal advertising. A disgraceful, classless move by John McCain's campaign.

Are Dems so desperate they need to cook up false claims of racism already? I guess we should have seen this was going to be coming down the line at some point.

I've seen the Ad airing and the image is up for a few seconds of the :30 seconds. The G is also pretty clear in the TV spot. The post of the video is darker. Next time it airs, take a look.

Yeah and it was a cross behind Huckabee. Sometimes a bookshelf is just a bookshelf.

Mr. Bookshelf. Go to the blog digg. They are discussing this ad and have a post of the same shot undoctored showing all 5 letters C H A N G E. Maybe you are right, they unintentionally cut off the E and went to the effort to mask out the C without taking any of that time to read the four letters left. You're right, it is purely coincidence.

I am not a John McCain supporter. But to say there was any kind of subliminal racist messaging going on is just stupid. I am soooo sick of people seeing racism under their beds, in their closets, or anywhere else they choose to see it. It makes me sick.
Someone needs to be slapped. Or maybe a lot of people.