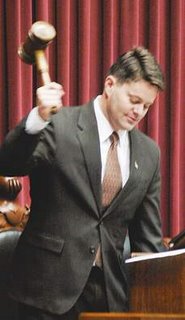 Virginia Young of the St. Louis Post-Dispatch reports that former Speaker of the House Rod Jetton, R-Marble Hill, is returning to the General Assembly, but not as a legislator.

Jetton is the owner/publisher of Missouri Times, a newspaper that will cover the legislature:


Though newspaper cutbacks have been the norm for nearly a decade, Jetton said he wasn’t worried about getting into a struggling industry.He said his publication will tap into readers who are passionate about politics, as well as those who crave more local news about Jefferson City.“I think we can make it pay,” he said.The printed version of the Missouri Times will be offered in racks or via mail, with subscriptions costing $325 a year, according to marketing material Jetton distributed.

Jetton's post-legislative consulting career took a nosedive after his arrest on a charge of assaulting a Sikeson woman during a bout of rough sex, in which the woman reportedly failed to use the safe words "green balloon." Jetton pleaded guilty to misdemeanor assault in May 2011 and was placed on probation.