Joplin Mayor: We have the stay-at-home ordinance in place, we have it ready to go, but we're not going to use it 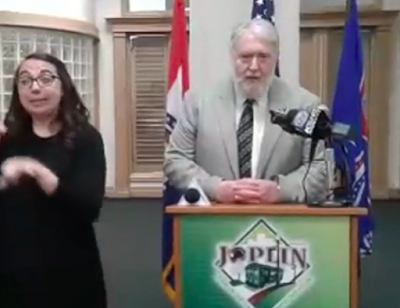 During a briefing less than an hour ago at City Hall, Joplin Mayor Gary Shaw updated the public on the status of a possible stay-at-home ordinance for the city.

"We have the ordinance in place, we have it all ready to go and we can enact it whenever we need it," Shaw said.

The mayor said he had been talking with City Health Department officials, as well as the area medical facilities and indicated he was following the lead of Gov. Mike Parson.


"We are listening to what our governor is doing."

Shaw said he was continuing to receive considerable input from the public.

That input, Shaw added, has been roughly split.

Shaw attempted to reassure the public, noting "We're trying to stay right on top of this and trying to do what's best for all of our citizens.

"Shelter at home if you can," he encouraged.


Shaw said the city had been forced to take steps because people were not following the guidelines limiting the number of people (10) who can be together in one place.

As an example, the mayor pointed out the city had taken action on the groups of young people who were getting together and playing basketball at city parks.

"We had to close down the basketball thing."

***
Thanks for supporting the Turner Report/Inside Joplin with a voluntary subscription or contribution of any size at the PayPal buttons below. Contributions can also be mailed to Randy Turner, 2306 E. 8th, Apt. A, Joplin, MO 64801.

I saw the comment on basketball courts. You NEED to shut parks down!!!! The equipment is very dangerous for little ones. And they are gathering all times day AND night!!!!!
I KNOW because I Live right next to one.
I am also scared living so close that if people are infected it will come into my house. I am elderly and very scared

Why can't the mayor be proactive rather than reactive? I am hoping that the citizens realize that their health takes priority over economics and do the right thing even without the mayor's order.

Also close down the falls and wildcat glades. Was out for a drive and drive by both and they had an extreme amount of people at both. Just dumb people just dumb.

Why don’t you listen to the ones who are not selfish, protect the public health. Why wait until there are many cases.

As usual, the mayor and city council are failures at leadership. Remember this when you vote.
They need to enforce shelter in place.
When you keep electing the same officials you can expect the same results. They are corrupt.

They are just following the president's example.

Dear "elderly",
COVID-19 isn't airborne. It cant just drift in your windows. It .just be passed to you from the moisture of someone's mouth, like a sneeze or cough. Otherwise, if you were to touch something they had touched and didn't wash your hands before touching your face, etc..

It is spread airborne! When a person coughs, sneezes or even talks is when it becomes airborne. That’s the reason for social distancing.