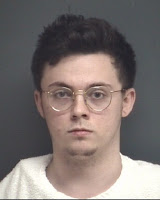 An 8:30 a.m. Thursday, June 11, bond reduction hearing is scheduled for Brian O'Grodnick, 22, Joplin, who pleaded not guilty during a video arraignment this morning in Jasper County Circuit Court to four counts of felony child abuse.

The bond hearing was scheduled after Judge Joseph Hensley denied a request for a reduction in bond. O'Grodnick is being held in the Jasper County Jail on no bond.

During the hearing, O'Grodnick indicated he intends to apply for a public defender.

Joplin Police Department officers arrested O'Grodnick following an investigation that began with a call to a home at the 1900 block of E. 8th Sunday about a child who was not conscious and was not breathing.

The child was taken to a Joplin hospital and then airlifted to a Kansas City hospital where he died Tuesday.

The charges against O'Grodnick all involve earlier abuse incidents that included the Joplin man slapping, choking and punching the boy and recording the incidents on video that was discovered on O'Grodnick's phone.

You're failing this child if he gets out on bail ...period....

Where is the charge for MURDER? This child is dead because of him.... nothing less than murder is unacceptable

I say go ahead and let him out on bond, he won't make it to court. Save the taxpayers money and time.

Reduction in bond?!?!?! He cause the death of a 2 year old. In my opinion a slow painful death seems suitable. The fact that he did this to a child is sickening