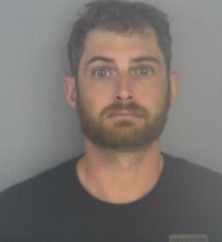 A Baxter Springs, Kansas man pleaded guilty to interstate stalking and protection order violation charges during a hearing this morning in U. S. District Court in Springfield.

No sentencing date has been set for Zachariah James Garner, 32, Baxter Springs, Kansas, who admitted violating a protection order dozens of times by contacting his wife, a Joplin resident, after she filed for divorce in Jasper County Circuit Court, including calling her 22 times in one day.

Garner's crimes were detailed in the plea agreement:

On May 6, 2020, the Joplin Police Department requested the Federal Bureau of Investigation's assistance in investigating Zachariah James Garner, the defendant, for violating orders of protection against his wife, A.G., and reportedly stalking her.

Upon looking inside her mailbox, A. G. located a "drug screen" with Garner's name on it The document included a letter from Garner.

On April 7, 2020, A. G. reported to the JPD Garner continued to drive past her house daily and left her a handwritten letter. JPD Officer Chris Dunning called Garner and Garner admitted to leaving the letter in A. G.'s mailbox. Garner said he would make sure this did not happen again.

On April 14, 2020, A. G. reported to JPD Officer Katherine Ivie that she received a text message from Garner with an attached image of a GPS screen shot. The message stated Garner was going to be at her house shortly.

The GPS image was attached to a text message which stated, "If u won't answer, then I guess I'll just head on over that way see ya in a bit it's only 24 hrs. in jail then at it again I guess.'

A. G. reported she had received 22 telephone calls that day from Garner and received an eight-page letter from him the previous day.

On May 5, 2020, A. G. reported to JPD Officer J. Carnahan that she continued to receive telephone calls and text messages from Garner and he was still leaving items at her residence. A. G. repeatedly expressed to law enforcement that Garner's actions were causing her substantial emotional distress and fear.

On May 7, 2020, FBI Task Force Officer Charles Root and JPD Detective McGough conducted a post-Miranda interview with Garner. Garner admitted he lived in Kansas and was aware there was an active ex-parte ordered against him.

Garner admitted to repeatedly violating the order of protection, including through text messages, voice mails and coming to A. G.'s residence. Garner also admitted to using multiple third-party cellular telephone applications to attempt to conceal his identity while messaging A. G.

So, with all of these continual Complaints and Threats, especially after an Ex Parte or Restraining Order was given - why wasn't he ever Arrested and Charged??? The Police and the Prosecuting Attorney's Office need to do their Job and Charge and Arrest him - What were they waiting for - for this Woman to be Physically Hurt or even Killed - by this Lunatic? HOW MANY TIMES TIMES DOES IT TAKE TO GET YOUR ATTENTION???