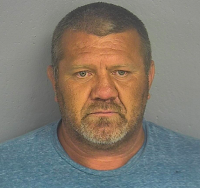 If government prosecutors get their way, a Joplin man will spend most of the rest of his life in prison.

In a sentencing memorandum filed today in U. S. District Court for the Western District of Missouri, the U. S. Attorney's office asked for a 25-year sentence for Mark E. Burdge, 50, Joplin, citing a history of lawbreaking that covers nearly his entire adult life.

Burdge pleaded guilty in November to his role in a drug-trafficking conspiracy that distributed at least 12 pounds of methamphetamine in the Joplin area, as well as to illegally possessing numerous firearms.
The defendant’s serious criminal history began when he was 29 when he was arrested with methamphetamine and marijuana in 1999.
He was initially sent to an institutional drug treatment program within the Missouri Department of Corrections (“MDOC”) and was released in October 2001 to probation.
About a year and a half later in May 2003, his probation was revoked and his sentence executed. He was paroled a year later in May 2004. After his release, he drove without insurance and his seat belt, he possessed marijuana, failed to keep a probation appointment, and was arrested with a controlled substance in Oklahoma.
He went back to prison on April 28, 2006. His sentence on that original drug case was discharged on January 4, 2010. On December 7, 2010, the defendant was arrested with methamphetamine.
On February 8, 2012, a warrant was executed at the defendant’s home and officers located 4.5 grams of methamphetamine, a glass pipe, a digital scale, baggies with residue, and $3,110 in cash.
As a result of both incidents, he went back to prison on March 19, 2012. He was paroled in December 2012. On September 25, 2013, a search warrant was again executed at the defendant’s home and officers found $25,820 in cash, methamphetamine residue, marijuana, six guns, one of which was stolen, and many of the components of a methamphetamine lab. The defendant also had other stolen property.
In April 2014, he was sentenced to prison on two new cases and returned to prison on the cases from 2010 and 2012. He was paroled in 2015, and eventually discharged from parole in 2016 and 2017 on his four cases.
On May 9, 2018, a warrant was again executed at his home. Officers located methamphetamine, marijuana, Xanax, $20,550 in cash, glass pipes, a digital scale, 4,467 rounds of ammunition, and 19 firearms, four of which were stolen.
The defendant admitted to bringing at least 12 pounds of methamphetamine to southwest Missouri from Oklahoma and this was confirmed by an unnamed source.
On July 18, 2019, another warrant was executed at the defendant’s home. Officers again found methamphetamine, pipes, baggies, digital scales, bullets and $24,300 in cash. In addition to the defendant and another person, there was also a 10-year-old child present in the home.
The defendant is now 50 years old. He has been committing crimes and spinning a revolving door at the MDOC for 20 years. The defendant claims a 18-year period of sobriety between 1993 and 2011, but that is belied by his violations of supervision.
In addition to using drugs and committing new crimes, he also failed to attend treatment and failed to report travel, residence, and employment. His past is not just the past of an addict, it is the past of someone who lives outside the law and has continued to do that for the vast majority of his adult life.
It is the past of someone who lives in a world where dealing drugs, even manufacturing drugs, and collecting and having firearms in conjunction with those drugs is normal.
The defendant is not beyond redemption. He does not have a history of violence and he did fairly well in high school. However, there are few other items in the PSR that indicate either that the defendant could or, more importantly, would want to do anything different than what he has been doing for the past 20 years.
The Government is asking for a long sentence that may mean the defendant spends a great deal of the rest of his life or the rest of his life in prison.
Unfortunately, that sentence is called for by the guidelines, where it is not even a top end sentence, and it is called for by the need to keep the community safe and to deter the defendant. Whether the defendant could learn respect for the law at this point is doubtful, but a sentence below the Guidelines simply does not achieve the goals of sentencing.
Twenty-five years is a long time, but the 20 years the community has suffered his distribution of drugs and the potential for harm he has created so many times by combining drugs and firearms is long enough.
Burdge's sentencing hearing is scheduled for 2 p.m. Wednesday, March 24 in Springfield.
Posted by Randy at 3:50 PM

Yet child Molesters and Rapists are paroled after 2.5 years.