Edwards: I'm in it for the long run 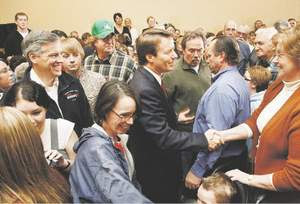 Former Sen. John Edwards told an audience of more than 800 at Springfield Monday that he is is the presidential race for the long run:

He told reporters his is a viable campaign and financially strong, having had the best fundraising month online since he began.

"And secondly," Edwards added, "I know when I get heard, this message works."

The approach seemed to work during the Springfield rally, where he essentially told Ozarkers that he is like them and their worries are his worries.

In the only reference to Bush's State of the Union address that night, Edwards said Bush would lay out an economic stimulus package that leaves out tens of millions of Americans who need help now. It's not expected to produce any results for months, he said.

He said some women will do their monthly breast exams and find a cancerous lump, as his wife did. But unlike the Edwards, who have health insurance, these women won't be able to get lifesaving treatments, he said. "You can't get chemotherapy at the emergency room."

"The only answer is real universal health care," he said, stirring more applause. His plan would cost $90 billion to $120 billion a year, he said, "But I've got a way to pay for it. Get rid of George Bush's tax cuts ..."

When asked how he would return jobs to America — such as hundreds in Springfield lost to Mexico when Zenith Corp. left — he blamed lost jobs on "terrible trade deals ... and NAFTA is one of the worst."

He said America needs to change its trade laws before it loses more jobs.

"That bleeding has to stop," Edwards said.

(Springfield News-Leader photos)
Posted by Randy at 3:29 AM