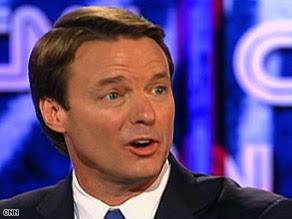 Third-place Democratic presidential contender John Edwards will continue his promotion of working class families and attack on special interests during his stop in Springfield Monday, according to a campaign news release.

On Monday and Tuesday, January 28th-29th, 2008, Senator John Edwards will travel to
Missouri to meet with voters and discuss his plans to make sure our government works for working families and the middle class, not just special interests. From guaranteeing universal health care to creating good jobs and enacting trade deals that help workers, not just big multinational corporations, Edwards will take on entrenched interests and fight for working and middle class families.

"Powerful entrenched interests are standing in the way of the change our country desperately needs," said Edwards. "We need to stand up for the middle class and American jobs before it's too late. Saving the middle class is going to be an epic battle, and that's a fight I was born for. I know that if we stand together, we can take back our country. We can build the One America we all believe in."

Edwards personally understands the struggles facing Missouri's families. He was born to a working class family and raised in small, rural mill towns across the South. Edwards has spent his life taking on powerful interests on behalf of families like the ones he grew up with.

Edwards' message is resonating with voters in red states and blue states, in big cities and small towns. A recent CNN poll showed Edwards was the only Democrat to beat all four leading Republicans nationally, and state by state polls show even more conclusively that Edwards is the most electable democrat in key battleground states -- and even win in states like Missouri and Oklahoma that have gone "red" in recent presidential elections.