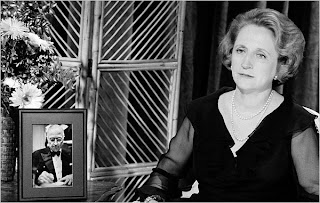 Margaret Truman Daniel, the daughter of Lamar's most famous native son, President Harry S Truman, died Tuesday in Chicago at 83.
Mrs. Daniel, achieved fame in her own right as a the author a series of mystery novels:

Most Americans first knew Margaret Truman as the young woman with blue-green eyes, ash-blond hair and dimpled cheeks who was the only child of the somewhat obscure vice president from Missouri who had ascended to the presidency on the sudden death of President Franklin D. Roosevelt on April 12, 1945, as World War II neared its end.

Before long, they were following her career as the aspiring singer whose doting father sprang to her defense with a memorably scorching letter to a Washington music critic who had had the temerity to belittle her talent.

In time there was her headline-making marriage to a dashing newspaperman, Clifton Daniel, who eventually became the managing editor of The New York Times, and the birth of their four sons.

As the decades passed, Americans by the hundreds of thousands knew Mrs. Daniel, too, as Margaret Truman, the author of 32 books, including biographies of both her parents and 23 mystery novels in her popular “Capital Crime Series,” all set in and around Washington.

The confrontation that in retrospect became the climax of Mrs. Daniel’s singing career took place in December 1950. She had been singing professionally since March 16, 1947, when she made her debut as a coloratura with the Detroit Symphony Orchestra in a radio broadcast that drew an audience estimated at 15 million and, afterward, mixed reviews from the critics.

Later that year, in her first appearance on a concert stage, she sang before a huge audience — estimates range from 15,000 to 20,000 people — at the Hollywood Bowl, accompanied by the 90-piece Hollywood Bowl Symphony, led by her favorite conductor, Eugene Ormandy. In the next few years she sang in more than 30 cities, appeared at Carnegie Hall and signed an exclusive contract with RCA Victor Red Seal Records.

And so she came to Constitution Hall in Washington.

“Because of my father, I was more easily able to obtain important engagements,” she wrote in her book “Letters From Father: The Truman Family’s Personal Correspondence” (Arbor House. 1981). “But I also received more attention by first-string critics and more demanding audiences, who felt that because my father was the president, I had to be not better than average, but better than the best in order to justify my appearing on the stage.”

Mrs. Daniel thought her performance at Constitution Hall to be one of her better ones. But Paul Hume, the music critic of The Washington Post, while praising her personality, wrote that “she cannot sing very well.”

“She is flat a good deal of the time,” Mr. Hume added, concluding that she had no “professional finish.”

Incensed, President Truman dispatched a combative note to Mr. Hume, who released it to the press.

“I have just read your lousy review,” it said, adding, “I have never met you, but if I do, you’ll need a new nose.”

In the ensuing uproar, reporters pressed Mrs. Daniel for her reaction to her father’s letter. “I’m glad to see that chivalry is not dead,” she told them.

Mrs. Daniel did not have much of an affinity for Lamar, according to Chad Stebbins' biography of longtime Lamar Democrat publisher Arthur Aull, All the News is Fit to Print

When Truman accepted his vice presidential nomination in Lamar on Aug. 31, 1944, Mrs. Daniel was not impressed with the city. "The senator's daughter recalled in 1973 that the event was too much for a town the size of Lamar to handle. "Toilet facilities and the sewage system broke down," she wrote. "The parking field was turned into a huge mudhole by the heavy rainstorm the previous day." Aull, however, reported that the entire Truman Day went off without a hitch. "The day was made to order and everything moved merrily as a wedding bell," he wrote.
Posted by Randy at 4:02 AM