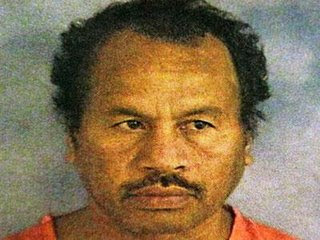 The public defenders representing accused killer Eikan Elam Saimon have asked for a continuance. Saimon, 53, Neosho, is charged with three counts of first degree murder, four counts of assault, and single counts of felonious restraint and armed criminal action in connection with the Aug. 12 shooting rampage during an afternoon Micronesian service at the First Congregational Church of Neosho. The murder victims were Pastor Kernal Rehobson and church deacons.

His trial is scheduled to begin June 23.

The motion was filed Friday by public defender Sharon Turlington, a specialist in death penalty cases who was added to Saimon's defense team last week, along with Cynthia Dryden, an attorney who has handled many cases involving DNA evidence.
Posted by Randy at 7:26 PM