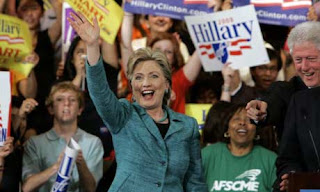 It's a long road to 1600 Pennsylvania Avenueand it runs right through the heart of Pennsylvania.

For six weeks Senator Obama and I have crisscrossed this state, meeting people up close, being judged side by side, making our best case. You listened and today you chose.

With two wars abroad and an economic crisis here at home, you know the stakes are high and the challenges are great, but you also know the possibilities. Those possibilities are endless, if we roll up our sleeves and get to work with a president who is ready to lead on day one.

That means ready to take charge as commander in chief and make this economy work for middle-class families. And I thank you. I thank you, Pennsylvania, for deciding I can be that president.

For me, the victory we share tonight is deeply personal. It was here in Pennsylvania where my grandfather started work as a boy in the lace mills and ended up as a supervisor five decades later. It was here where my father attended college and played football for Penn State. And I am back here tonight because of their hard work and sacrifice. And I only wish they could have lived to see this moment, because in this election I carry with me not just their dreams, but the dreams of people like them and like you all across our country - people who embrace hard work and opportunity, who never waver in the face of adversity, who stand for what you believe and never stop believing in the promise of America.

I'm in this race to fight for you, to fight for everyone who has ever been counted out, for everyone fighting to pay the grocery bills or the medical bills, the credit card and mortgage payments and the outrageous price of gas at the pump today.

You know, the pundit's question whether Pennsylvanians would trust me with this charge and tonight you showed you do. You know you can count on me to stand up strong for you every single day in the White House.

This has been a historic race and I commend Senator Obama and his supporters tonight. We are, in many ways, all on this journey together to create an America that embraces every last one of us. The women in their 90s who tell me they were born before women could vote and they're hopeful of seeing a woman in the White House. The mothers and fathers at my events, who lift their little girls on their shoulders and whisper in their ears, "See, you can be anything you want."

Tonight, more than ever, I need your help to continue this journey. This is your campaign and this is your victory tonight. Your support has meant the difference between winning and losing. We can only keep winning if we can keep competing with an opponent who outspends us so massively. So, I hope you'll go to HillaryClinton.com and show your support tonight because the future of this campaign is in your hands.

Some people counted me out and said to drop out, but the American people don't quit and they deserve a president who doesn't quit either.

Tonight all across Pennsylvania and America, teachers are grading papers and doctors and nurses are caring for the sick, and you deserve a leader who listens to you.

Waitresses are pouring coffee and police officers are standing guard and small businesses are working to meet that payroll, and you deserve a champion who stands with you.

And of course, all across the world, our men and women in uniform, some on your second, third or fourth tour of duty, you deserve a commander in Chief who will finally bring you home and who will rebuild our strained military, do whatever it takes to care for our veterans wounded in both body and spirit.

Today, here in Pennsylvania, you made your voices heard and because of you, the tide is turning.

We were up against a formidable opponent who outspent us three to one. He broke every spending record in this state trying to knock us out of the race. Well, the people of Pennsylvania had other ideas tonight.

The presidency is the toughest job in the world, but the pressures of a campaign are nothing compared to the pressures of the White House, and today, Pennsylvanians looked through all the heat and saw the light of a brighter tomorrow - a tomorrow of shared prosperity and restored world leadership for peace, security, and cooperation. After seven long years of President Bush, we've got our work cut out for us and we don't have a minute to waste. So, it's high time we stop talking about our problems and start solving them and that is what my campaign is all about.

All through this campaign, I have offered solutions: solutions for good jobs you can raise a family on; jobs that can't be shipped overseas; and on Earth Day, clean, renewable green jobs that can put us on the right track to the future; solutions for independence from foreign oil and exploding gas prices; quality affordable healthcare not just for many Americans or most Americans but for every single American, no exceptions and no excuses; affordable college and real improvements in public schools, not the failure that is No Child Left Behind. We're going to end the war on science and have a renewed commitment to science and research. We will tackle everything from autism to Alzheimer's, cancer to diabetes, and make a real difference.

I look forward to discussing all of these issues with the people of Indiana, North Carolina and the states that I'll be visiting in the coming weeks.

Not long ago a woman handed me a photograph of her father as a young soldier. He was receiving the medal of honour from President Truman at the White House. During world war II, he had risked his life on a daring mission to drive back the enemy and protect his fellow soldiers. In the corner of that photo, in shaky handwriting, this American hero had simply written: "To Hillary Clinton, keep fighting for us." And that is what I'm going to do because America is worth fighting for. You are worth fighting for.

It was in this city that our founders declared America's independence and our permanent mission to form a more perfect union. Neither Senator Obama nor I nor many of you were fully included in that vision, but we've been blessed by men and women in each generation who saw America not as it is, but as it could and should be. The abolitionists and the suffragists, the progressives and the union members, the civil rights leaders, all those who marched, protested and risked their lives because they looked into their children's eyes and saw the promise of a better future.

I am so honoured by the support and the hospitality of all of the people of Pennsylvania. I want to especially thank Governor Rendell and Mayor Nutter, lieutenant governor Catherine Baker Knoll and the state treasurer Robin Wiessmann and state party chair TJ Rooney. These are great leaders and dear friends, as are my friends from the Congress, Representatives Murtha, Sestak, Schwartz and Kanjorski. Their support means the world to me and the support of 100 mayors across this commonwealth and so many other state and local leaders who worked hard for this victory tonight.

I want to thank my friends in our labour unions for standing with us every step of the way. And my outstanding staff, volunteers and supporters here in Pennsylvania and across America.

I especially want to thank my family for their incredible love and support. Bill and Chelsea have crisscrossed Pennsylvania from one end to the other. My brothers Hugh and Tony who love Pennsylvania with all their hearts, from our childhood summers in Lake Winola, and my mother who is with us tonight.

So let me ask you tonight - will we once again be the can-do nation, the nation that defies the odds and does the impossible?

Will we break the barriers and open the doors and lift up all of our people?

Will we reach out to the world and lead by the power of our ideals again?

Will we take back the White House and take back our country?

I believe with all of my heart that together we will turn promises into action, words will become solutions, hope will become reality, so my answer to any who doubt is "yes, we will".

Thank you and God bless you.
Posted by Randy at 9:20 PM

This is what your "blog" has been reduced to? You just transcribe insignificant primary victory speeches? No analysis? Poor form, sir. Poor form.