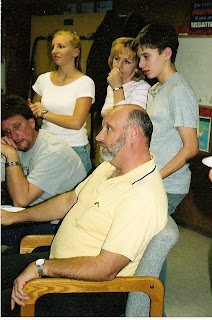 A motion to dismiss two of the eight counts against Grand Valley Independent Baptist Church pastor Raymond Lambert will be argued during a 10 a.m. May 6 hearing in McDonald County Circuit Court.
The charges against Lambert, 53, were filed in connection with alleged ritual sex with children. Lambert's lawyer, former McDonald County Prosecuting Attorney Duane Cooper, has asked that two counts that date back to 1995 be dismissed, a sexual abuse count from May 31, and a statutory sodomy charge from July 31.

Lambert's trial is scheduled to begin Monday, June 30.
Posted by Randy at 6:40 PM