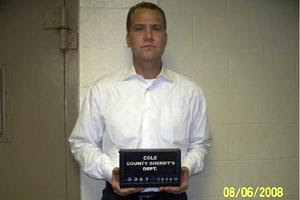 With less than one week to go before former Rep. Scott Muschany, R-Frontenac, 42, goes to trial on sex charges, his lawyers are filing motions right and left.

One of those motions, filed Tuesday is to "exclude evidence of Muschany's Official Acts as a Member of the Missouri Legislature."

Who knows what that means, though it could simply be referring to some of the legislation to which Muschany's name was attached, and seem ironic in retrospect.

Muschany who has been indicted by a grand jury for an alleged deviate sexual assault of a 14-year-old daughter of a state employee, co-sponsored Rep. Steve Tilley's bill in 2006, which called for increased penalties for adults found guilty of having sex with children. The summary of HB 1236 follows:

3) Creates the crime of statutory rape in the third degree when a person older than 21 years of age has sexual intercourse with a person younger than 17. The crime will be a class C felony unless the offender is older than 30, in which case it will be a
class B felony;

(4) Creates the crime of statutory sodomy in the third degree when a person older than 21 years of age has deviate sexual
intercourse with a person younger than 17. The crime will be a class C felony unless the offender is older than 30, in which
case it will be a class B felony;

And, according to Chad Livengood's article in the Aug. 6, 2008, Springfield News-Leader:

In March, Muschany signed on to a U.S. Supreme Court brief filed by Gov. Matt Blunt urging the high court to clarify whether the Eighth Amendment prohibits the death penalty for child rapists.

Blunt urged lawmakers in his January State of the State address to pass legislation allowing the death penalty to be applied to child rapists.

The Supreme Court eventually struck down a Louisiana law that allowed the death penalty to be administered in cases of child rape and sodomy.

It is not hard to see that information could be a problem for Muschany if it surfaces during the trial.

Muschany is charged with felony deviate sexual assault of a 14-year-old girl, as well as a misdemanor charge of sexual misconduct, alluding to an incident in which he allegedly exposed himself to the same girl, who was the daughter of a state employee. The crimes allegedly took place May 18, the last day of the 2008 legislative session.

His trial is scheduled to begin next Thursday.
Posted by Randy at 5:42 PM

The dad fabricated the story and coached the daughter on what to say. The mom's first story was the Muschany was innocent until Social Services leaned on her and told her that she wouldn't see her kids any more. She then changed her story and said that she saw Muschany molest her child.