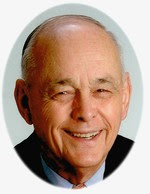 Some sadness for the KSN family today as Jack Parker, 84, husband of longtime Channel 16 fixture Carol Parker, died Monday after a long illness.

Services for Mr. Parker, who was a World War II veteran, and a longtime Joplin businessman, will be held 11 a.m. Thursday at First Community Church. The family will receive friends 6 to 8 p.m. Wednesday at Parker Mortuary. His obituary is printed below:

In 1943, Jack was among the first group of 18 year olds to be drafted into World War II. He served in the United States Army as a Ranger in England, France, and Germany. Following his service in the war, he graduated from Washington University in St. Louis, Missouri, with a degree in Business and Marketing. He earned a degree in Mortuary Science from St. Louis University in 1952.

Jack married Carol Louise Clark on September 9, 1956. They had a happy and loving marriage for 52 years. She survives.

Upon graduation from college, Jack worked as the Youth Director of the YMCA in Kansas City, Missouri. He went on to be the co-owner of Steve Parker Mortuary and owner of Wingo’s Camera Center, both in Joplin. He also worked as a realtor in the Joplin area.

Jack was active in the community. He was one of the oldest members of the YMCA, which he joined when he was in the 4th grade. He was a lifelong member of First Community Church where he also served as an elder, and past President of the Board. He was a member of the Joplin Rotary Club, MSSU Alumni Association, Silver-Haired Legislature, Joplin Elks Lodge #501, Joplin School Board, Joplin Jaycees where he was a past President, Ambassador for Joplin Area Chamber of Commerce, Joplin Board of Realtors.

Jack loved his family and especially enjoyed his grandchildren and many friends. For over 30 years, Jack played golf on Wednesdays and Saturdays at Twin Hills Country Club with a group known as the Jolly boys. He met a group of Coffee Buddies every morning and dined with Carol and friends every Friday night at the Elk’s Club. His positive outlook on life rubbed off on everyone around him. He had a strong faith and lived his life accordingly.

Memorial contributions may be made to First Community Church, or to a charity of choice.

I remember him being around the station from time to time...everyone always enjoyed him being there.

I had no idea that he was associated with Parker's...that being said, not knowing that, there wouldn't be anywhere else I would go to if I was in that situation. They have always done us right. I believe that they are under new ownership, but the quality and caring obviously carried on.

I wonder if we will ever return to a time that is reminiscent of the years that he lived...day to day was certainly no easier than today, but things seemed so much more genuine than the pace of today.