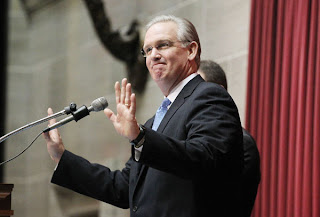 Gov. Jay Nixon has $2 million in his account for his re-election campaign, according to his second quarter disclosure report. The following news release was issued today:

In a strong show of early support, Gov. Jay Nixon’s campaign raised more than $1.6 million during the past finance period and has more than $2 million in the bank for the 2012 re-election effort.


“The early financial support is critical, but the real reason that Jay Nixon is in a strong position to be re-elected is the tough and effective leadership he’s shown as Governor during these challenging times,” said Oren Shur, Nixon’s campaign manager. “While Gov. Nixon continues to focus his attention on balancing the state budget without raising taxes and creating new jobs to turn this economy around, the campaign will aggressively prepare for 2012.”

The summary page of the finance report is attached and the full report will be available today on the Missouri Ethics Commission website.

Some additional facts about the previous finance period:

93% of contributors this period are from Missouri.

NIXON LEADERSHIP TO DATE
Taking care of the Government Employee Union Bosses; failing to clean up E coli lakes; awarding our tax money to felons; spending in excess of $430,000 of tax dollars on travel (which he commands be hidden in agencies, other than the Gov. Office); presiding over a MO unemployment rate that continues to exceed the too high national average; promoting Obama Care and being formally named an adviser to his good friend and fellow Democrat executive Pres. Obama and...
has two million in campaign account.
A failure to lead in all categories but one.

Don't forget he had his people finagle License Bureau contracts to the heavy supporters like Alternative Opportunities to the tune of what? $17.5 million per year?

It may not be over but Peter Bender is not gonna beat him.