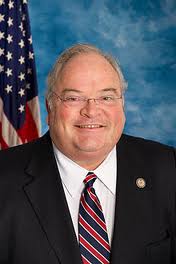 The defense cuts currently planned to take place in January would be extremely harmful to our nation.  However, I also believe our nation must balance its budget.  As a result, I support replacing current defense cuts with responsible cuts which target areas of the budget suffering from waste, fraud, abuse, or are simply inefficient uses of taxpayer money.
The crippling defense cuts are mandated by the Budget Control Act.  The defense cuts will take place on January 2, 2013, unless Congress can come together and pass legislation to avoid them.  To date, the House is the only chamber that has passed a plan to achieve Budget Control Act savings by replacing these cuts with responsible spending reductions.
In September, the Obama administration released its plans to cut defense spending.  The report stated that these cuts “would result in a reduction in readiness of many non-deployed units, delays in investments in new equipment and facilities, cutbacks in equipment repairs, declines in military research and development efforts, and reductions in base services for military families.”  The result is these steep cuts will have a “devastating impact” on our armed forces and their families.  I recently visited our brave men and women at Whiteman Air Force Base near Knob Noster, Missouri.  Cuts to base services will hurt these hard-working military families, and this is simply unacceptable.
The defense cuts could lead to a loss of more than 1 million private sector jobs according to the National Association of Manufacturers.  We need to support efforts to create jobs in our country, not efforts that create job loss which would likely lead to greater unemployment.
America’s military faces a world with growing hostility and instability at the same time many of our weapons systems are nearing the limit of their useful lifespan.  Legacy programs like our aircraft carrier fleets, which are crucial for force projection across vast oceans, are aging and need to be replaced with systems that are able to confront the new strategic realities of our world.
A strong America is a safe America and a safe world.  Only a few decades ago the world was caught in a bloody cycle of industrial scale warfare where thousands of Americans died in single battles.  America is a powerful, stabilizing force in the world because of our overwhelming conventional military power.  I want to be clear that I do not believe America should be a world policeman; however, the mere fact that we possess a strong military force discourages other nations from taking a militaristic stance toward their neighbors.
We cannot balance the budget, nor should we attempt to balance the budget, by gutting core security obligations that the federal government is constitutionally responsible to fulfill.  My House colleagues and I support efforts to replace the impending defense cuts with responsible spending cuts and reforms. It is now up to the president and Senate to offer a proposal to offset the cost of the crippling defense cuts.
I remain committed to working with colleagues on both sides of the aisle to replace the defense cuts with responsible cuts and reforms.
Posted by Randy at 7:01 PM