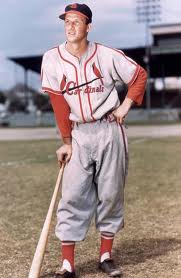 One of the joys of my childhood began at age six when my dad introduced me to the joys of St. Louis Cardinals baseball on radio.

Until that time, my acquaintance with the Cardinals and other major league baseball players was solely through the cards on the back of Post cereal boxes.

Now I could listen night after night as Harry Caray and Jack Buck detailed the adventures of my favorite baseball team, whether they were in St. Louis, New York, or my favorite games, the ones I listened to after everyone else had gone to bed from Los Angeles and San Francisco. Even when the skies were cloudy and every other word on KMOX-AM was interrupted by static, I kept listening.

I don’t remember the opponent the Cardinals were playing the first night I listened, but I remember as clearly now as on that summer day in 1962, Harry Caray’s call when catcher Gene Oliver hit the game-winning home run. “It could be, it might be, IT IS…a home run.” That was Caray’s signature call, but I did not know that at the time.

The next day, I took my bat and red rubber ball into the backyard, threw the ball into the air, hit it as hard as I could and ran around imaginary base paths, recreating the previous night’s game and games that were yet to come.

But one Cardinal stood above them all, Stan “The Man” Musial.

It was a comeback year for the Cardinal star. After a 1961 season that had seen Musial slump, he rebounded at age 42 to hit .330 and remind Cardinal Nation of the greatness of his game in the ‘40s and ‘50s.

One of the saddest moments of my early years was when the 1962 season ended and I discovered I would have to wait until April to hear any more games.

That next year was the last one for Stan Musial.  The 1962 renaissance did not carry over. Musial had what would have been a solid year for any other player, but not for “The Man.”

Still, the Cardinals made a herculean effort to put Musial in the World Series for the first time since 1946. They won 19 of their last 20 games and finished one game behind the Dodgers. In those days, only one team from each league made it to the postseason.

Stan Musial retired after the 1963 season, greatly appreciated in the heartland, but never receiving anywhere near the same national attention as his peers, Ted Williams and Joe DiMaggio.

In St. Louis, Musial’s stature as the embodiment of the Cardinals never faltered, even as generations of fans were born long after he last graced Busch Stadium. Each year at opening day ceremonies, the largest ovation was reserved for “The Man.”

The opening game of the 2013 season will be a sad one for St. Louis Cardinals fans. Musial will be undoubtedly be there, but only as the greatest moments of his 23-year career are replayed on the jumbotron and as Cardinals and former Cardinals recall the man who made a difference, not only for Cardinals baseball, but for the St. Louis community during the past seven decades.

He came from a different era, one in which a stunning comeback at age 42 was not automatically coupled with suspicion of illegal substance use.

What better reminder during a week when the sports world was transfixed by a serial cheater, Lance Armstrong, and the imaginary girlfriend of Notre Dame football player Manti Te’o,  that there was a time when a quiet gentleman like Stan Musial served as a true role model for this six-year-old and so many others.
Posted by Randy at 6:19 PM