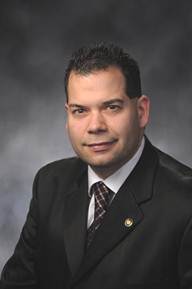 (In his latest report, Rep. Mike Kelley, R-Lamar,  says he expects the legislature to take a close look at the purchase of an expensive plane for the use of Gov. Jay Nixon.)

It was a very active week in your State Capitol.  On Monday Governor Jay Nixon gave his annual State of the State Address to a Joint Session of the House and Senate.  This constitutionally mandated event is used by governors to lay out their priorities for the upcoming legislative session and also to present a budget blueprint for the upcoming fiscal year.
The most controversial topic he touched on was his support to expand Medicaid coverage in Missouri.  Medicaid covers medical care for low income families and individuals and is considered to be an entitlement program.  Several years ago when Medicaid was consuming an ever growing chunk of Missouri’s budget, the criteria for who would qualify was changed to be more restrictive.
This is part of what is being called ObamaCare.  The plan calls for the federal government to pay for the expansion for the first three years.  After that, Missouri would have to begin paying if they want to continue the program.  While health care coverage is an ongoing concern, I am not sure if putting more people on public assistance is the answer.  Also, when we have a United States Senate that has not passed a budget in four years it brings into question how reliable the federal government would be in making the payments.  This doesn’t even take into account that our federal government borrows forty cents of every dollar it spends.
Sometimes an issue arises that seems as though it could have been avoided.  The state has many discretionary funds that are just that, to be spent at the discretion of those who oversee them.  Those same people are also expected to use discretion in spending these taxpayer dollars.  When the news broke that the Highway Patrol had spent nearly $6 million to buy a new airplane without going through the appropriations process, it caused some real concern among the member of the legislature.
I am not opposed to the governor using a plane to travel around the state.  I actually think it is a good idea for a governor to be visible and a plane certainly allows for faster travel.  The state owned a 1999 King Air 90 that was used for state officials to use.  I am not an airplane expert, but a King Air 90 is a nice plane by any standards.  There has been no explanation as to why we suddenly, and without justification to anyone, needed a brand new King Air 250.
As this sessions unfolds, I expect there will be more than a few hearings to determine who authorized the purchase and why the specifications in the bid request were tailored so tightly that it basically eliminated a competitive process.  This story may be around for a while.
Posted by Randy at 7:26 PM