Speaker Tim Jones: It's time for the debate to begin 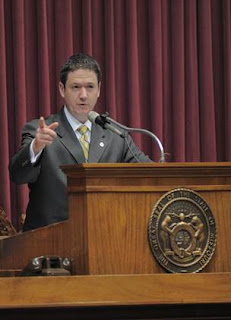 In his latest capital report, Speaker of the House Tim Jones, R-Eureka, addresses the inaugurations on the state and national level and the beginning of the legislative session.

If you are like most Americans, myself included, this week you watched the inauguration of our nation’s recently re-elected president.  Though he did not receive my vote, and I often disagree with his policies – sometimes vigorously, the day marks an occasion in which our nation should be proud.  So many people in other, not so far off corners of the world, do not have the privilege or right to have an opinion, a choice, and a dissent of agreement regarding the government to which they find themselves subjected.  In those places it is not unfathomable for the government to oppress – often violently – those who attempt to inspire debate.
Right here in Missouri, we have had our own inauguration.  In keeping with the Constitutional requirements you have asked of your government, Governor Nixon will lay out his vision for the state in the annual State of the State Address.  We will welcome him to the House Chamber on Monday, January 28 to receive his remarks.  If you would like to listen live via our website www.house.mo.gov, it will begin at 7 pm.  Afterwards, I am honored to have been asked to deliver the Republican response to the people of our state and the media.  And thus, the debate we are so grateful to be afforded will begin.
Posted by Randy at 9:33 PM