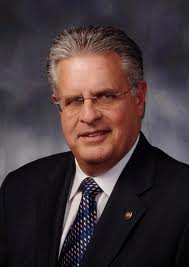 
Senate Leader Tom Dempsey, R-St. Charles
“Twelve years ago, when I was elected to serve in the Missouri General Assembly, I came to Jefferson City mindful of the deep trust that was placed in me by the people of my district.
I came to the State Capitol voting for policies in which I deeply believed. One of these was defending the right of law-abiding citizens to keep and bear arms. I am a proud and faithful supporter of the Second Amendment.  I grew up hunting with my father, and I have carried on this tradition by teaching my son to love the outdoors. There are few things I like better than to watch the sun come up while I wait in a duck blind in the Missouri River bottoms in St. Charles County.

Anyone who looks at my record over the past decade will know that my support of gun rights is unassailable.

However, I have reached a point where, in my view, political prudence and good public policy have parted ways, and I have been forced to pick which path I will follow. While I have been advised to take the path of least resistance and vote to enact into law a policy about which I have grave reservations, I believe I must do what is right for the citizens of our state and for the voters who sent me here.

Over the past few weeks, several concerns have been raised about the constitutionality of House Bill 436. I have been advised by my own legal staff that this bill very likely violates both the freedom of the press and the freedom of speech guaranteed to all Americans. My love of the Second Amendment does not trump my love for the First.

In addition, the language of the bill would appear to allow certain armed school teachers to hold a student for up to four hours for any school policy violation without notifying a parent. This could include such minor infractions as being in the hall without a pass or being tardy.

Also disturbing to me is a new cause of action which could allow frivolous lawsuits against our hard-working police officers and sheriffs’ deputies for acting in good faith in performance of their official duties. Clearly, these dedicated public servants don’t make large salaries. Where will they get the money to hire lawyers to defend them from these lawsuits?  At the end of the day, even if they are ultimately successful in defending themselves, they could very well be bankrupted by the experience.

My support of the Second Amendment is firm and enduring, but the issues that have been raised deserve to be addressed. I wish I could simply propose an amendment to fix the flaws that have come to light but unfortunately, the Missouri Constitution (which I also respect) does not allow us to amend a bill during veto session – we are forced to make a “take it or leave it” decision. Small errors or blemishes can sometimes be overlooked because of the overall good the legislation will do.

However, this bill raises enough concerns that I could not support it in its present condition.
The new session of the Legislature starts in less than four months. As pro tem, I will do all I can to fast-track a bill that will address the serious concerns I have raised. I believe we can pass a much better bill next year, and I am fully supportive of that effort.”

Majority Floor Leader Ron Richard, R-Joplin
“I have always been an unwavering advocate of our Second Amendment rights. I started my legislative career by supporting the veto override on the right to carry and continued voting and sponsoring gun legislation during my tenure.

As I have stated previously, I took an oath to protect and uphold the U.S. and Missouri constitutions. Over the past few weeks, law enforcement officials, newspapers, and others have brought real concerns regarding some flawed language and the constitutionality of House Bill 436.

Some of the concerns brought to my attention include: school teachers (armed and trained) would be able to hold a student for up to four hours without notifying a parent for any school policy violations, and criminals could possibly sue a police officer who acts in good faith in the official performance of his or her duty. I pledge to you, in the next four months, legislation will be filed regarding the Second Amendment Preservation Act that is constitutional and does not hinder law enforcement officers’ ability to do their jobs.”
Posted by Randy at 8:45 AM