Free downloads of C. J. Huff and the Assassination of a Teacher's Character 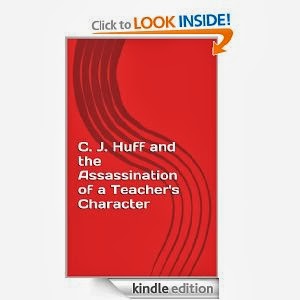 Beginning at about 2 a.m. Sunday, or about five hours from the time I am writing this, the entire transcript of my May 23 termination hearing at the Joplin R-8 Administration Building at 32nd and Duquesne will be available for two days as a free download.

There is no introduction, no words of my own in the book, C. J. Huff and the Assassination of a Teacher's Character, other than those I spoke when I testified. The nine-hour hearing began with the administration attorney reading scenes containing sex, violence, and/or profanity just to give everyone the idea that I was an evil human being who deliberately exposed children to pornography. It was only later in the day that the truth came out- they were never able to find even one student who had read the book.

I published the transcript because I look at it as sort of a turning point, not only for my teaching career, which came to an end because of the things C. J. Huff and his administrators said (only administrators testified against me; one parent shared concerns but offered no evidence, otherwise the only parents and students who testified were there to support me), but also because it was the first time that the public was able to see just how ruthless C. J. Huff can be and what little concern he and his administrators have for sworn oaths to tell the truth.

I initially thought I was not able to offer this as a free download, but I tried again tonight and found it was possible.

I do offer one piece of advice- Please, whatever you do, do not download this on a Joplin R-8 computer. They are watching you.
Posted by Randy at 7:11 PM

Will read this for sure...

Will be a riveting book, when I left Joplin last year I thought that I would never fall back in love with teaching. R-8 almost ruined my spirit, and they haven't changed a bit. Glad I got away from Huff & Co. when I was on top!

If you posted the blog at 7:11 pm Saturday night and the transcripts will be available at 2am Sunday that would be 7 hours - not 5. Good thing you didn't teach math.

You are correct about the math and in your statement, but the time stamp on my posts has always been two hours off, so it actually was five hours when I wrote it.

I should add that, even though I was correct with my five hours statement, you are absolutely right. I would have been a horrible math teacher.

First of all, you are NOT an "author" of this book any more than any other criminal undergoing a hearing in which he is found guilty is the "author" of the trial transcript.

Secondly, you were duly found guilty and fired under the due process of law accorded you, then you refused to appeal it because the hearing was done according to the book. Neither CJ Huff nor the Joplin School Board are at fault for removing a "rogue teacher" who thought that he could get away with anything. The right-worshipful retards on this blog of yours have no input as to why you were rightfully permanently removed for cause.

Lastly, this "book" is not downloadable for free, which is all it is worth, if anything.

You have been fired for cause from every career you have pursued, Turner. The fault isn't in them who fired you but in them who hired you. The sooner you figure out that you are simply dishonest and not to be trusted in any position of responsibility and decide to change, the better for you, Turner.

Amazon required that an author be listed, but you are correct that I am not the author.

Calling him a criminal as in your first paragraph is a lie. He was not charged with any crime. I worked with this man for 8 years and know he is a good man and not what you say.

I should like to add that I have been fired from every job I lost as well, because I never quit. Really, there's two main ways to lose a job - you either quit or you are let go. I imagine that if Turner had quit his jobs, 9:37 would say "Hey Turner, you crook, it's a fact that you quit every job you had so why should we trust you?" 9:37 shows up every other post to smear, and everyone sees through it. I have my doubts whether they bother to read any of the comments after they post, otherwise they would know what everyone thinks of them. Coward troll!