Rotten to the Common Core

I am not talking about nightlife in Newtonia, the town of 200 where I spent my formative years, though that town not only doesn't have any bars, but no longer has a grocery store, a barber shop, or a gas station either.

The bars to which I refer are the kind you desperately wait for as you stare helplessly at your cell phone.

That hypnotized look was in the eyes of most of the 75 who attended a House Interim Education Committee meeting in the Corley Auditorium in Webster Hall at Missouri Southern State University tonight.

Just like the rest of them, I stared at my IPhone, waiting for the bars, just one at least - so I could call someone who had a clue because no one on stage appeared to have one, at least not as far as Common Core Standards were concerned.

I listened to Jill Carter, the young lady whose long hours of work paid off last week when the East Newton R-6 Board of Education became the first in the state of Missouri to pass a resolution questioning Common Core. She made sense. I heard parents who had a hard time understanding why we need to lower our standards and neglect the classics and the proud history of our country. They made sense, though you can make a good argument that those things are not necessarily left out of Common Core.

That was really not what some of the legislators did. From some, it was more like "Why don't you hicks bother to actually read Common Core Standards and you will see they are the greatest thing to ever hit education?" 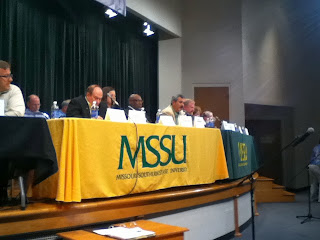 As if Jill Carter has not actually pored over the standards. As if any of the people who took time out of their busy schedules to speak have not read the standards.

It must be tough for some of those legislators pulling on their pants two legs at a time.

About half of the legislators were on the other side of the fence and were totally opposed to Common Core Standards, but even some of them said not to be concerned, "No one is going to tell teachers what to teach or tell schools what their curriculum is going to be."

Some legislators came out better than others, including our Joplin-area legislators, Charlie Davis, R-Webb City, who presided over the session, and Bill Reiboldt, R-Joplin.

As for the legislators who spoke with such assurance that Common Core Standards were good and could do everything from educating all children to curing warts, or those who think Common Core Standards are bad, but no one is trying to tell you how to teach or how to write your curriculum, I have just one suggestion.

Do a little more research before January- please!