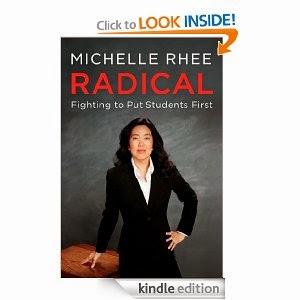 If only it had been a steak dinner, a cup of coffee, or a plaque from some favor-seeking special interest naming him governor of the year.

Sadly, the only gift Gov. Jay Nixon has accepted from a lobbyist in 2013 is a copy of education "reformer" Michelle Rhee's book, Radical: Fighting to Put Students First, a book that advocates eliminating teacher tenure, making decisions on teacher salary based on students' standardized test scores, and blaming teachers for everything that is wrong with education in America.

According to the Missouri Ethics Commission, the gift was presented to the governor by Lea Crusey on April 22, when she was still a lobbyist for Ms. Rhee's organization Students First. Ms. Rhee is also a registered lobbyist in Missouri. Now, Ms. Crusey has moved on to Washington, D. C., where she works for an organization called Democrats for Education Reform, a name just about as misleading as Students First.

Whether Nixon has actually read Michelle Rhee's book I don't know, but his Commissioner of Education Chris Nicastro has certainly shown that she has no problems with some of Ms. Rhee's views.

As noted earlier tonight on the Turner Report, NEA, through a Sunshine Law request, uncovered documents showing that Ms. Nicastro has helped retired St. Louis billionaire Rex Sinquefield in his efforts to set up a ballot initiative to eliminate tenure for Missouri classroom teachers.

Perhaps it is time that a lobbyist for MNEA provided Gov. Nixon with a book that makes sense on public education, Diane Ravitch's Reign of Error: The Hoax of the Privatization Movement and the Danger to America's Schools.

Considering Ms. Nicastro's actions with Rex Sinquefield and the push toward Common Core Standards in Missouri, I am beginning to wonder which twosome is more incompetent when it comes to education, Jay Nixon and Chris Nicastro or Barack Obama and Arne Duncan.
Posted by Randy at 7:04 PM

With all do respect to those who educate and spend so much time working with children from all walks of life, I must say that I have long been in favor of doing away with teacher tenure.

From my years reporting on local school board meetings, time and time again I came across many who had lost their edge because of tenure.

I want the best for all of our children, and for those who teach them. Results are what matter, not who has squatted in their spot the longest.

I am not at all certain that it matters as to the format in which material is presented to young people, those which want to learn will do so and the rest will simply mark time and do what they have to do to get through. I think the two most important things to a High School Student is gasoline and perfume and all the rest is fringe. The smart ones will either go on to college or drop out and the dumb ones will go to work as soon as they graduate. We have long labored under the illusion that we can make learning applicable to all and that just is not the case. Kids will only learn if they see the benefit to themselves by doing so.