Stacey Newman: Predominant theme in House this week was discrimination 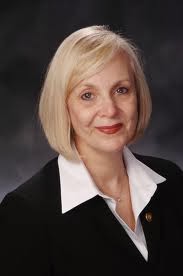 (In her weekly report, Rep. Stacey Newman, D-St. Louis, continues to inform us on the collection of comedians that we call the Missouri House of Representatives.)
This past week our legislature outdid itself.  Two weeks ago I predicted more discrimination bills were on their way and sure enough, that was the predominant theme on the House floor this past week.  I don't recall any legislator promoting these on campaign literature in during election seabut it's obvious discrimination efforts have superceded all other priorities.
I believe discrimination should be part of our country's history and left strictly in the past for others to study and dissect.  Discrimination should NOT be part of our state's future or any political agenda designed to inflame a certain base of voter to elect like-minded electeds.  Discrimination legislation designed to suppress and hurt specific citizens should NOT be allowed anywhere near our state capitol.  I am ashamed and embarrassed but this agenda has spurred me to step up my efforts to fight back.
MAKING IT HARDER TO VOTE 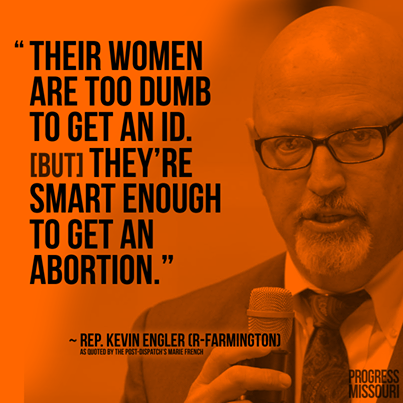 This was actually said on the House floor last Tuesday by Rep. Kevin Engler (R-Farmington) during debate on HJR47, a constitutional amendment allowing for photo voter ID's.

His comment was said after several Democrats mentioned voters who would not be able to obtain the underlying documents required for a state issued ID, including women who were born and/or married outside of Missouri. Over 200,000 current Missourians do not have a state issued photo ID and would no longer be able to cast a ballot on election day - even though they have done nothing wrong.

I hope you find Rep. Engler's comments on the floor as offensive as I do.

In addition, Rep. Joe Don McGaugh (R- Carrollton) admitted in debate that there has never been evidence of voter impersonation fraud in Missouri because it is "secret".

"Secret" fraud?  That's why they want to change the rules to make voting harder for some?
Republicans claim photo voter ID is necessary to combat fraud but concede that there has never been a reported case of voter impersonation fraud at the polls in MIsosuri, the only type of election fraud a photo ID could prevent.  Democrats say the real purpose is to make it harder for many - primarily racial minorities, the elderly and disabled who overwhelmingly tend to vote for Democrats.
I am firmly against any efforts to make voting harder - as is every Democrat legislator in the entire country.  There is absolutely no reason to change our election laws to require additional documents/fees for many longtime eligible voters.  There is absolutely no reason - no reason at all - to change the Missouri Constitution which contains stricter voting rights language than even our U.S. Constitution:
Missouri Constitution, Article I, Bill of Rights, Section 25: "That all elections shall be free and open; and no power, civil or military, shall at any time interfere to prevent the free exercise of the right of suffrage." - last amended in 1875.
I firmly believe that altering the Missouri Constitution to take away rights, particularly voting rights, is wrong and immoral.
HCS HJR47 passed the House Thursday, February 27 by a vote of 103-50 after 2 days of debate and moves now to the Senate.  The companion bill which spells out how photo Voter ID would be implemented, HB1073, also passed the House by a vote of 98-49-1 present.  Rep. John McCaherty (R- High Ridge) changed his "yes" vote from HJR47 to "present".
HJR47, if passed by the legislature, would go straight on the November 2014 ballot.  Only if passed by a vote of the people would any Missouri photo voter ID requirements then be constitutional.
COPYING ARIZONA ---MO SENATOR FILES "DISCRIMINATION" BILL
I held my breath Wednesday evening as many did throughout the country awaiting Arizona Governor Jan Brewer's decision on Arizona's SB1062, which would allow religious-based discrimination by businesses.
She vetoed it as many had urged her to do.  Amidst the national outcry, nine additional states decided to drop their similar discrimination bills.  Many say this is code for legally allowing businesses to discriminate against the gay community.

Read more here: http://www.kansascity.com/2014/02/25/4848481/new-homophobic-religious-freedoms.html#storylink=cpy
Missouri's actions?  SB916, filed by Sen. Wayne Wallingford (R- Cape Girardeau) was introduced February 24 which would make it legal for Missouri businesses to cite religion as a reason to refuse service to anyone.
Sen. Wallingford said in a Kansas City Star article Friday that "he still supports banning discrimination in the workplace but also wants stronger protection for religious convictions.
Huh?  He also says he believes it will move towards a full Senate debate.
I fully support the Missouri Non-Discrimination Act - HB1858.  This bill would change the law regarding complaints filed wiht the Missouri Commission on Human Rights be revising the definition of discrimination to include unfair treatment based on sexual orientation or gender identity. It is wrong that the LGBT community can be fired from their job or evicted by their landlord in Missouri - that it would be legal to suffer that discrimination.  The House bill has never been granted a floor debate but every year the bill gains new sponsors and supporters.
KEEP YOUR EYES ON THESE BILLS...
HB1430 - sponsored by Speaker Tim Jones (R-Eureka) - "anyone providing medical services cannot be required to participate in medical care (specifically reproductive healthcare) that violate his/her conscience or principles."
LAST ACTION - PASSED THE HOUSE 116-38.  REPORTED TO THE SENATE
HB1173 - sponsored by Rep. Eric Burlison (R- Springfield) "capping non-economic damages awarded to plaintiffs in medical malpractice lawsuits to $350,000"
LAST ACTION - PERFECTED IN HOUSE, NEEDS ONE MORE VOTE
SB613 - 2nd Amendment Preservation Act, sponsored by Sen. Brian Nieves (R- Washington)  - "would nullify all federal gun laws, overrule municipalities and allow open carry of any firearm & allow state law enforcement to arrest federal law enforcment officers"
LAST ACTION - PASSED THE SENATE 23-10, MUST BE REFERRED TO A HOUSE COMMITTEE
THANK YOU SPRINGFIELD PROGRESSIVE VOTE COALITION
Thursday evening I was invited to be the guest speaker for a Missouri Progressive Vote Coalition (a statewide coalition of progressive community groups and labor unions) event in Springfield.  So I took the long way back home from Jefferson City via Springfield and so glad I did.
Being with energized southwest Missouri community leaders and local activists was exactly what I needed.  It was heart to see that voters throughout the state are also against these discrimination efforts and understand what our priorities should be.

What has more f*cking nuts than a Planter's Peanut plant? The Missouri Legislature.

Welcome to Redneckistan where all the Racists and Bigots hide behind their religion and only elect other God Nazis to the Legislature.

Ah, the libs have spoken.

The hateful, vitriolic speech of the Republicans is why their party is losing support. People are tired of puritanical divisiveness. It's time to open our hearts and minds and leave judging to the God they claim to worship, but whose mandates they do not follow with their perpetual punitive measures. Love thy neighbor; judge not lest ye be judged; let he who has not sinned cast the first stone; do unto others as you would have them do unto you; how do you see the speck of chaff in your brother's eye but not see the beam in your own?; therefore; be merciful, just as your Father is merciful: Practice your preachings, Right wing, or be silent.

Apparently so have the God Nazis.

Between the tenthers and the god botherers the teabaggers have a assembled a quorum in the legislature.