Question to C. J. Huff: Do you have that in a middle finger? 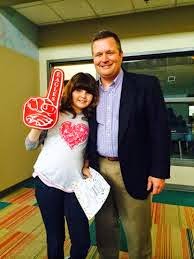 The DESE website shows that the average increase in pay for teachers across the state from 2010-2013 was $1,084. In Joplin, teacher pay increased from 2010-2013 a grand total of $312. Part of this is reflected in teacher turnover, with fewer teachers on the upper end of the scale. Part of this is because we have not had a raise over 1.2% since the recession. However. CJ Huff's income, when he was hired six years ago, was $160,000 and is now said to be $177,000. This is a tremendous increase, not including his speaking fees. He also does not pay for his insurance. His pay also does not reflect the raise that he is said to have gotten after Angie Besendorfer left--it is purported that CJ, Paul Barr, and Tina Smith all got large raises after she left--split her check, so to speak.

The question is, has he earned his salary? When CJ Huff came here, the district was accredited with distinction, the teacher pay was competitive, and scores were rising. In 2008, English/Language Arts, all grades combined, were at 51.9% advanced/proficient rate district wide. In 2013, they were at 52%, so no growth of note. In mathematics, the district overall had an advanced/proficient rate of 51.4%. In 2013, that rate had fallen to 46.8% and is continuing to fall. The teacher turnover rate has been tremendous, and the layers and layers of programs and extra non-teaching employees have been of no benefit. And, it is difficult to understand how the increase in administrative pay, particularly CJ Huff's, can be justified.

In any other district he would have been fired long ago. The embarrassment of the lawsuits, the suspicious terminations of staff, the drop in academics, the audit, and the bad press should send him packing now, as it is better late than never.
***
Do you see a pattern developing:
- David Humphreys asks for an audit by the State (via a petition) for the R8 school district - then CJ all of a sudden asks the state to audit the R8 school district

What you are seeing here is a "classic" case of "reacting" - so that I will not "look bad" to the media and public.

This proves that CJ Huff tries to get his way until the heat is on - then he will cave in and spin it like it was his idea.

This proves that there is COMPLETE lack of leadership in the R8 school district!!!!

Leadership is having a VISION charting a course and getting everyone on board so that everyone is going in the same direction.

The BOTTOM LINE is that the R8 district needs a leader not someone who reacts so that they will not look bad. The Joplin citizens, students and teachers - can be much better served by another School Superintendent (given that this position is paying over $177,000 per year).
Posted by Randy at 6:30 PM

It seems like I've done a lot more than $300+ in extra work since the tornado. I feel my motivation draining away.

If they cut Eagle Advantage, we will be in a hurt. That's Christmas at my house. I hope you have a great Christmas, Ebeneezer Huff!

I guess if you keep getting people who come in lower on the salary scale, you can keep giving yourself more money.
Who in their right mind thinks that Tina Smith can or will do right by teachers? My impression of her is that she doesn't like teachers very much. Perhaps she gets her information from the administration's spies.
Other districts have coaches and the teachers don't think of them as spies. Their teachers also get paid more and don't have to work in the presence of evil.
Makes one think.

I thought last year's Opening Day was brutal. The attempt to "persuade" us that things were really good, according to Comrade Huff and his gang, was purely an attempt at intimidation. This year the open contempt cannot be hidden or denied. I would rather skip it altogether than have to watch another video of Huff's family enjoying the luxury of the private pool. The man is tone deaf. We are not impressed, and we do not think he is at all admirable.

Will he force the bus drivers, cooks, and other staff he's cheated out of several days' pay to come watch the parade? I would say no to that. Gas is just too expensive to waste it that way. The staff of Joplin R8 has been abused as long as they will take it. It's time for a change.

The middle finger is right. I'd say the words, but I know kids read this blog. Send him packing.

Opening day. blech
If EVERYONE stays out, it would work but if even 1 person goes, the rest will be in trouble.
Other than an hearing an apology and resignation, I can't think of any reason to be there.

Tina Smith's husband is Dean of the School of Education at Pittsburg State University. She is former elementary school teacher. She is an importnt link for Huff to PSU where he might want to teach (or be Dean) someday, although some think his ambition is ultimately to be president of PSU.

The problem with a lot of schools is the administrators keep coming up with nonsense programs and paperwork to take time away from teachers to actually prepare for the classes they teach. Professional Learning Communities may have some value, but I fear it is just the flavor of the month with administrators to keep teachers overworked and scrambling to keep up with the real work they need to be doing for their classrooms!

Where do you think those principals come up with those programs and ideas? It's the upper admin.

I'd like to know how effective any salary committee headed by Tina Smith can be. Her overinflated salary, as well as that of her boss, depend upon the findings of the committee, which will undoubtably have the same parents and community members that always serve and give the administration whatever they want.

This should be headed by someone far more objective without a personal stake in the matter. I would be worried about my job if I served on it.